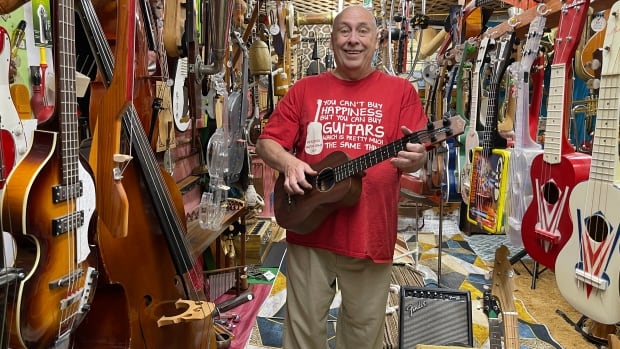 With too many instruments to count, Edmonton collector takes house music to a whole new level

From ukuleles and guitars to harmonicas and kazoos, the basement of Ron Mercer’s Edmonton home is filled with an elaborate music collection spanning 35 years.

“I keep going and I always get lost around 1700 or something,” Mercer said of the number of instruments he has crammed into the lower level of his house in the Inglewood neighborhood.

“I’m bored or starting to count the same thing twice, so I would say probably close to 2,000.”

Two narrow walkways allow Mercer or his visitors to walk through the collection which, despite its somewhat chaotic appearance, is meticulously classified.

“My wife and I traveled a lot and every time I went to another country I would buy an instrument or something like that,” said Mercer, who focused on his collection and started teaching. music since he retired from the RCMP. Human resources department.

The collection includes a Ukrainian section, a Middle Eastern section and even a hillbilly section.

And while the instruments are on display, they’re certainly not just for show.

Mercer’s passion for music began with learning the guitar, which led to banjos, which led to playing bass. Now he can DIY just about anything.

Mercer admits that he made some wrong notes while creating the museum-like exhibits in the basement of the house where he has lived for about 25 years.

“I had 200 pounds of white sand for my steel drums and stuff like that,” Mercer recalls. “But the cat was fascinated by this sand. And so it was a bad idea.”

And despite losing count and running out of space, Mercer said he’s not done adding to his collection, scanning everything from eBay to thrift stores as he bides his time while waiting for his next big. find.

“I know everything I have, so I never bought two of the same things,” he said. “When I look around I see white space, I have a lot more instruments to buy.”