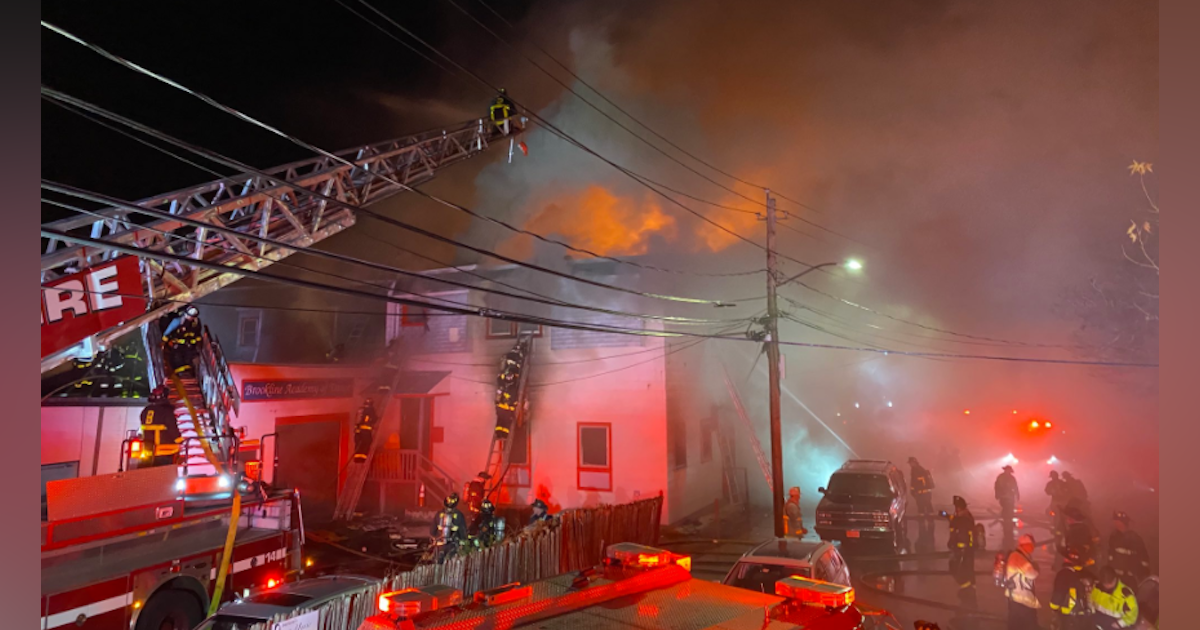 Dec. 17 – An eight-alarm fire broke out early in the morning today, drawing in more than 150 firefighters to tame the flames and canceling school for some Brookline students.

Brian Alkins, director of information for the Boston Fire Department, said the cause of the fire is still under investigation. The call first came around 4:30 a.m. and firefighters who arrived on the scene encountered “high winds and thick black smoke”, he said.

“The wind actually fueled the fire,” he said. “Once the wind came in, it pushed the fire throughout the building, and since it was a smoky building, we couldn’t see.” For the safety of the firefighters, they were prematurely evacuated from the building. Five hours after the first call, they were still fighting the fire.

“Since it’s such a big building, we can’t go inside,” he said. “We do firefighting outside, which makes getting to the fire seat a bit more difficult.” He added that two firefighters were slightly injured. More than 150 firefighters from Boston showed up, along with several from Brookline.

He did not know if there were any occupants inside the building at the time, or if any residents lived in the building, although he confirmed that it was a commercial building. He didn’t think the team would determine the cause of the fire by Friday.

Three middle school girls walking near 185 Corey Rd. said they were surprised to learn that class had been canceled at nearby Driscoll School in Brookline due to heavy smoke in the air, which was still visible hours later. late as firefighters continued to spray water on the tall building.

This is a current image of the 8 alarm fire in Brighton seen from above using the Boston Fire Drone pic.twitter.com/JmZd4COyuS

One of the students, Alexa, said she takes piano lessons inside the building, which houses a music school, recording studio, dance studio and home care business.

“It’s definitely not like the newer building, but I wouldn’t expect it to catch fire,” she said of the tall wooden structure. “I was shocked because my mum was like, ‘Oh, this is a place near Brighton, near your school,'” she said, realizing the building was her piano studio “It was rather surprising.”

Another of the girls said the water had turned brown in her house, and all three said their houses smelled of smoke. One, Virginia, compared the smell to bacon.

The fire has engulfed the entire large commercial building on Corey Road, businesses are attacking it from the roof of the adjacent building. pic.twitter.com/HKbXMCvioV

Third student Eva said she woke up to what she thought was foggy but was ‘so happy’ to learn later that school had been cancelled, giving the girls a three-day weekend before the holidays.

Visit the Boston Herald at www.bostonherald.com

Yamaha: Establishment of a music school in Riyadh as the first officially authorized music education institution in the Kingdom of Saudi Arabia