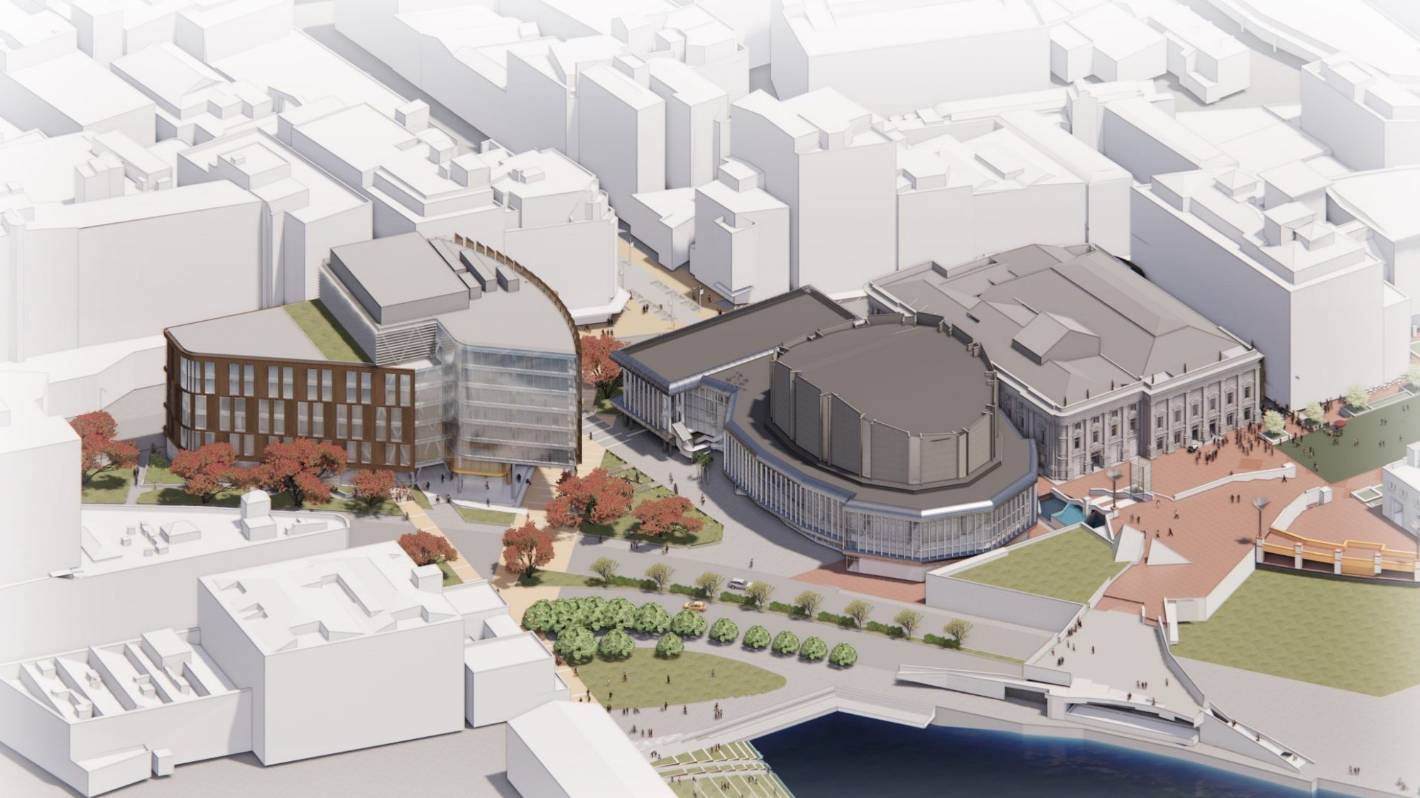 Wellington’s new music school could be ‘Juilliard of the Pacific’

Wellingtonians are seeing the National Music Center in the redeveloped Civic Square area for the first time, with champions of the wider development saying it will give the capital a cultural complex to rival New York’s famed Lincoln Center for the Performing Arts.

Victoria University of Wellington and the New Zealand Symphony Orchestra on Tuesday evening unveiled architectural designs for the National Music Centre, which will take up part of the renovated City Hall and two floors of a new building that will rise in the parking lot next to the Michael Center Fowler.

The car park is currently the temporary home of the Royal New Zealand Ballet, which move to the St James Theater once it reopens this year.

The refurbished and strengthened Wellington Town Hall is due to open in 2024, but the new building will not be ready until 2026. Together they will become the headquarters of the university’s New Zealand School of Music -Te Kōkī and the NZSO. This will be part of a music hub, located next to the Michael Fowler Center.

Together they will form “the Juilliard of the Pacific”, said former mayor of Wellington, Dame Kerry Prendergast, in reference to the famous school of music in New York.

Prendergast said the enclosure would put Wellington “center stage” on global cultural maps. Getting the orchestra to interact with the music students on a daily basis would have “amazing results”.

It would also attract a workforce and students to the city, while maintaining Wellington’s reputation as a creative and cultural capital, she said.

The orchestra’s general manager, Peter Biggs, said the “amazing” enclosure would be a “lively place”. “It will be the Lincoln Center of the Southern Hemisphere,” he said, referring to a more ambitious New York landmark – the Lincoln Center for the Performing Arts, which includes the New York Philharmonic, the Metropolitan Opera, the New York City Ballet, and the Juilliard School of Music.

The plans were unveiled as part of a fundraising campaign to raise funds to complete the NZSO and School of Music facilities inside the Town Hall and New Building, including offering people the opportunity to purchase a seat starting at $1,000 in the auditorium at City Hall.

Donations would be recognized by a nameplate on a seat in a designated area of ​​the auditorium, but this did not guarantee donors a right to the seat.

The full cost of the new building, which is being developed by Willis Bond, has not been made public. Asked about the cost, Prendergast said the information was “private to Willis Bond” and the tenants – Victoria University and the NZSO – would pay development fees and an annual lease.

The university and the orchestra would rent one and a half floors of the new building. Other tenants were to use the rest of the six-story development.

Inside the new building, the teaching, research and administrative departments would be grouped together on levels one and two. The ground floor would include a raised terrace, a performance square facing the public and shops.

For this sector, a covered walkway between Wakefield Street and the waterfront and green spaces had been proposed by the council.

On the ground floor of the town hall, the former Ilott theater would be reconfigured with a flat floor to become a jazz lounge that could accommodate up to 250 people with a foyer, spaces for the public, a green room and recording and backstage facilities with state-of-the-art equipment. – state-of-the-art loudspeakers and isolation booths.

It would also include a grand entrance and staircase, suites, and a new room named after art collector Christopher Parkin, containing a donated work of art.

The first floor could accommodate 250 people and would be a public performance space for students and university staff, the NZSO said. The upstairs balcony would be reconfigured so that the audience has a good view of the performances, with acoustics designed for small to medium sized acoustic music events.

The Debating Hall would continue to be used for Wellington City Council meetings and civic ceremonies.

On the second floor, a multipurpose space that could accommodate 200 people would be located, with variable acoustics that could be adapted for classical rehearsal, composition, music therapy and sound arts. Adjoining this would be a state-of-the-art sound recording studio, and several smaller rooms would allow for ensemble practice and the display of period instruments.