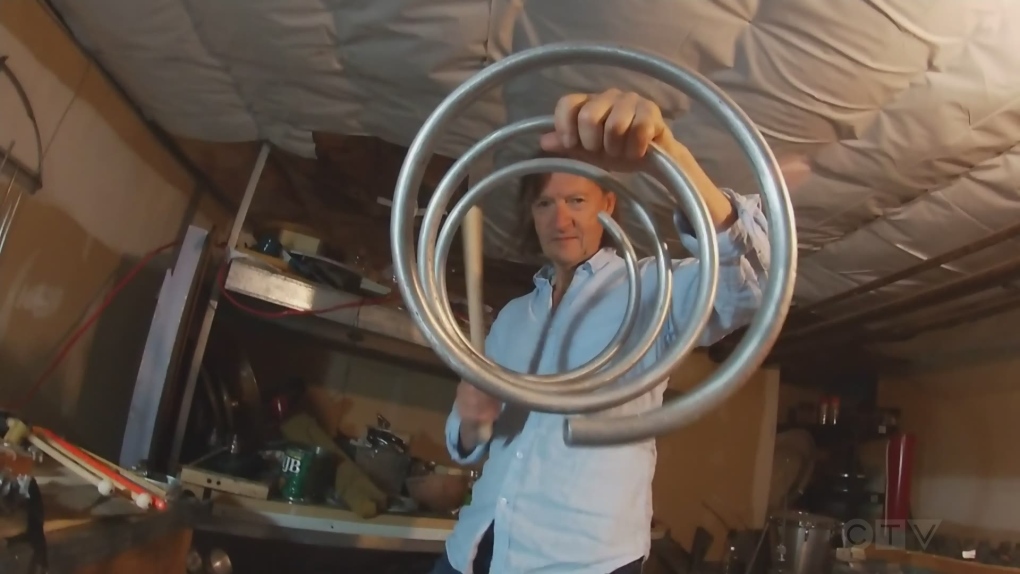 Although it sounded like “a beautiful beast” when young Gregory attached the car’s old hubcaps to the eaves in the rain, they made an “incredible percolation noise” that changed his life.

“I listened to it for days,” Gregory recalls with a smile.

It was so satisfying that the 8-year-old started collecting all sorts of rattling things – nails in jars, piles of keys, clothespins and paper in bike spokes.

“You have this moving soundtrack that you created yourself,” Gregory fondly recalls of the roar of his bike through the neighborhood. “It just made me happy.”

So it was no surprise when Gregory grew up and pursued music in New York. But although he learned to play blues, jazz and rock – even orchestral music – he didn’t feel the same as the sounds he had produced before.

Gregory responded by blurting something out to Justine about inventing her own instruments.

So Gregory began scouring industrial and construction sites for the right bric-a-brac.

“I have a ‘Spidey sense’ about it,” Gregory says.

Then he taught himself welding and metallurgy, before building more than 145 sound sculptures.

“So it doesn’t feel like the trash it used to be anymore,” Gregory says. “So it actually looks like something no one would throw away.”

His collection of instruments (which he calls his children and swears never to sell) includes a rotating drum, manufacturing materials from a failed “fast ferry project” and a percussion device compiled from pieces of an amusement park ride.

There’s also the discarded washing machine hose, which Gregory tied to a bagpipe reed, and a balloon he dubbed “The Annoyaphone.”

After inflating the balloon through the reed and the pipe, it deflates with a high-pitched vibrato.

While this instrument is silly, what Gregory has done with army surplus materials, like abandoned artillery shells from the Vietnam War, is substantial.

He used the shells to create a kind of xylophone, which Gregory plays with mallets, to produce the kind of resonant notes that produce goosebumps.

“[I wanted to] do something beautiful that people will appreciate and come to,” says Gregory. “Rather than flee.”

Today, Gregory and his band Scrap Arts Music use the instruments to stage dynamic performances that earn rave reviews around the world.

He hopes his work will affect people the same way those old Pontiac hubcaps changed him – to reconsider the possibilities of the derelict and be inspired to turn things around for the better.

“The world is an extremely creative place,” smiles Gregory. “You can keep creating.”

Peplowski started playing instruments that his father did not master