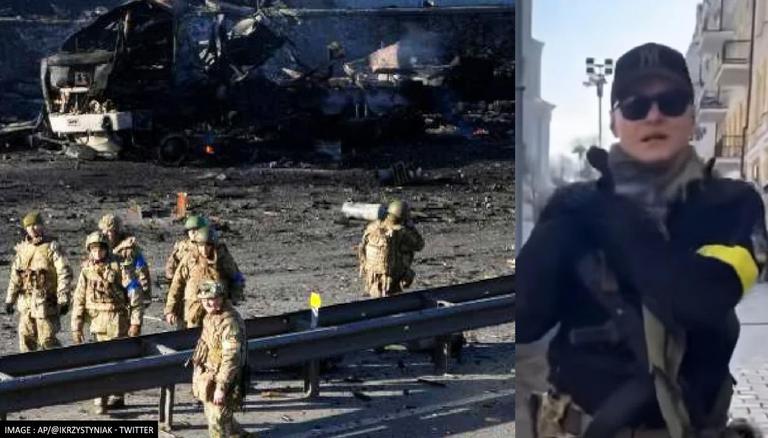 As tensions continue between the Kremlin and Kyiv for the seventh day in a row, Russian troops have stepped up their attacks on civilians in its neighboring country by targeting residential buildings and hitting police establishments in Kharkiv. Amid the unfolding chaos, Russia recently claimed to have taken full control of Kherson in Ukraine, while incidents of street fighting have been reported in the Kharkiv region. Visuals viewed by Republic Media Network show civilians stepping in amid the dire situation and joining the armed forces to defend their nation by taking to the streets. Notably, Ukrainian President Zelenskyy praised the nationals who volunteered for the battle to protest against their nation’s interests.

Amid the crisis and ensuing chaos, a Ukrainian musician decided to swap his microphone in an effort to help his country in its greatest battle ever. The musician, named Andriy Khlyvnyuk, was recently seen on viral social media images wearing military attire. He could be seen carrying a gun instead of a guitar. While talking with the euro news, Khlyvnyuk said: “Musicians are peacemakers, now is not the time to play the guitar. It’s time to take the guns. They bombarded us.” He further revealed that he left his children with their grandmother.

Using his courage to motivate people amid the crisis, footage featuring the singer has gone viral on social media where he can be seen performing outside a church. The photo shows Andriy in military attire, a New York Yankees cap with a rifle slung over his shoulder. By talking to rolling stone regarding his decision to join the army, he asserted that “Ukraine is well equipped to deal with any surge by Russian troops”.

He continued, “We don’t need anything. They are the ones who need us. The West and Ukraine claim to adhere to the same principles: equal rights for all, rule of law, right to choose, human rights first, not animal rule. of the strongest, but morality and intellect. They need us as a shield to protect everything.

Learn about the Ukraine-Russia War

The second round of talks between Russia and Ukraine has been postponed until March 3, 2022, as the Ukrainian delegation has not yet arrived for the negotiations. With many Indian students stranded in Russia, Prime Minister Narendra Modi had a phone conversation with Russian President Vladimir Putin on Wednesday. The two leaders reviewed the situation in Ukraine, particularly in Kharkiv where many Indian students are stranded.

get latest entertainment news from India and around the world. Now follow your favorite TV celebrities and TV updates. Republic World is your one-stop destination for trends bollywood news. Log in today to stay up to date with all the latest news and headlines from the entertainment world.