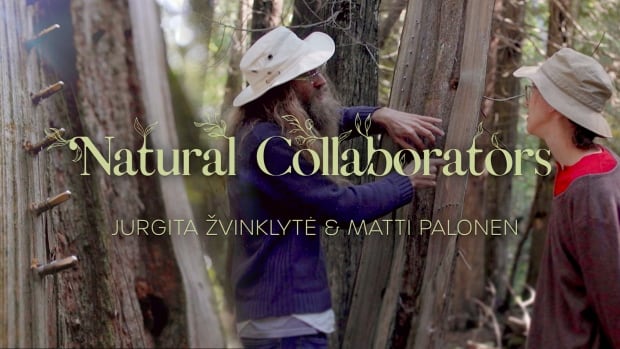 Tree Harps: This duo transforms trees into magnificent ephemeral instruments to record music in the forest

For these artists from across Canada, nature is more than a muse or subject: nature is an artistic collaborator, directly engaged in the process of creating art and deepening our understanding of the natural world around us. In this series, we meet artists who share creative control with nature. The wind, the trees, the grass, the plants, the sun are all potential partners in artistic creation, and what they have to express might surprise you. Watch the first episode now above.

Artists and musicians known as Honeypaw have an unusual method of making music and musical instruments. Ontario duo Jurgita Žvinklytė and Matti Palonen make “tree harps”, harps made from hollow or dead trees. They drill small sets of holes in trees to install ropes, play tree harps, record it, then take it down when they’re done.

Žvinklytė and Palonen are the subjects of the first part of Natural collaboratorsa new CBC Arts video series about artists finding inventive ways to use the natural world in their work.

Žvinklytė says that tree harps are a special type of instrument, because there’s no way of knowing exactly how they’ll sound until you start playing them.

“There’s always a kind of excitement, because how is it going to sound this time?” she says.

In their recordings, they also mix the ambient sounds of the surrounding forest: the chirping of birds, a woodpecker tapping on the trees, the wind in the leaves.

“I try to record each part separately, including the bass strings on the trees and all that,” says Palonen. “So when we put it all together, you want the full open woods feel.”

In the video above from filmmaker Nicolas Pollock, the pair use tree harps to record a nine-song album titled Ninth Tree Standingincluding traditional Finnish and Lithuanian songs, which they have since released.

“Finnish music is also very connected to the forest,” says Palonen. “So it makes sense that we end up in the forest, singing about these things.”

Palonen and Žvinklytė both say that the temporary nature of tree harps is part of what makes them special and has a certain beauty in itself.

“At the end of the recording session, we take the strings off so we can use them on another tree,” he says. “We’re removing the stakes so we can reuse them as well. I just want to get in and leave nothing but a few little holes for bugs to feed on.”

QC School of Music partners with Cafe on Benefit