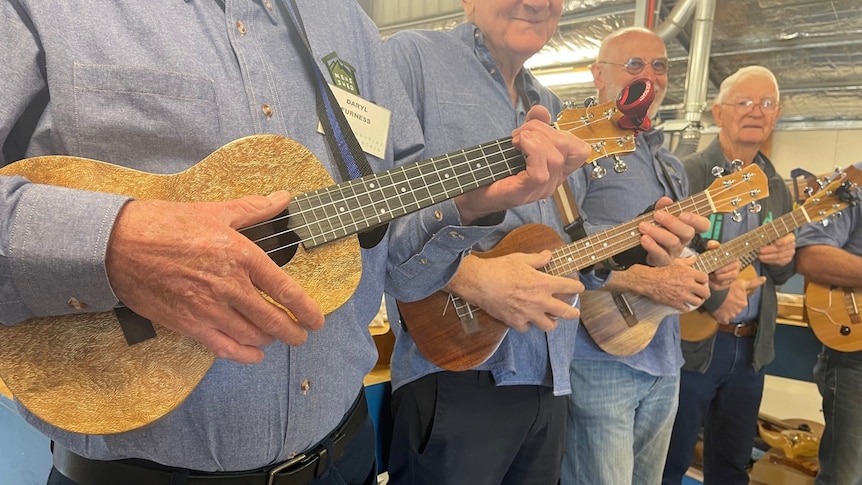 Scraps of wood usually ended up in a fireplace, but at the Tamborine Mountain Men’s Shed, scraps are turned into ukuleles.

What started as a carpentry project grew into a group of buddies using the handmade instruments in their own band, aptly named The Offcuts.

Men’s Shed mentor Keith Browning said he was asked why he was constantly bringing home leftover materials, so he began teaching the band how to build the instruments.

“What we’ve found here is that we can use this material,” Browning said.

Instruments are made from everything from scaffolding boards to antique furniture.

“I made molds and jigs and put them in the shed. From there, we evolved into a dozen or more people involved in producing quality instruments,” he said. declared.

While tools and skills are reasons to join the shed, friendship and support are what keep men coming back.

“Getting together, enjoying the camaraderie, sharing a cup of tea and learning new skills all at the same time.”

As the number of instruments grew, so did the band’s musical repertoire. Their first performance was at the hangar’s annual Christmas party.

“We started with some Christmas carols and it grew from there,” singer Rob Reed said.

“We meet every Monday at the Bowls Club to practice and have a repertoire of about 60-70 songs.”

The band have now started writing their own songs, inspired by the men’s shed community, including The Shed Shuffle.

Some songs are parodies of popular tunes, with lyrics from At The Hop reworked to become At The Shed, and the Hokey Pokey turned into Make a Ukulele.

“You take quarter-sawn lumber, check it’s good, look at the plans and make sure they’re understood,” according to the lyrics.

The band played gigs all over the mountain to raise money for men’s shed member Jim Stephens.

Mr Stephens was left paralyzed on the left side of his body after being treated for a brain tumor a few years ago.

He can drive, but has trouble getting in and out of his vehicle, so The Offcuts are on a mission to buy him a special rotating car seat, which they believe will improve his quality of life.

“He laughs at everything, and when he comes here it takes him about 15 to 20 minutes to get out of the car,” Men’s Shed president Paul Hunt said.

They’ve launched a crowdfunding page to help raise the rest of the money, and plan to book more live gigs in the area.