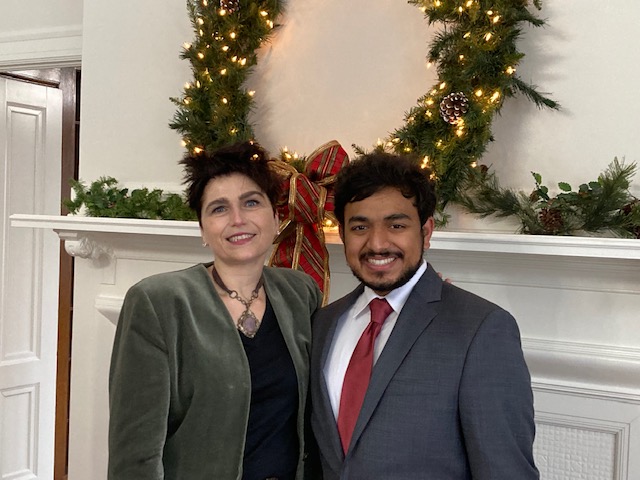 Staff, volunteers, supporters and students of the new QC School of Music celebrate in the snow

Ten-year dream for Hannah Holman finally came true on Friday morning as she helped cut the ribbon for the new Deanery School of Music.

After carrying out $235,000 renovations to the historic two-story building at 1103 Main Street, Davenport, the new music school next to Trinity Episcopal Cathedral will open for classes on Monday, January 17.

“I’m so, so excited and happy to be here today,” said Holman, Founder and Artistic Director of Dean, Principal Cellist of the Quad City Symphony Orchestra and cellist for the New York City Ballet – said outside the front door on Friday. “This dream of finding an exquisite location for music education in the Quad Cities has come true.”

The Deanery School of Music is a non-profit organization created to provide an inclusive home for high-quality music education, performance, and collaboration in the Quad Cities region. It seeks to enrich and improve the cultural and social fabric of the community through music and education.

Holman has been a member of the QCSO for 16 years and principal cello for 14 years. make this mutually beneficial,” she said on Friday.

She started researching buildings in 2012, but a year later she started performing in the New York City Ballet orchestra, so put the research on hold.

Holman first looked at the Dean (which was built in 1930 and had been vacant since 2009) in August 2018. After much research and discussion, she decided to move on.

“This building, which impressed me so much on that day in August, is for everyone,” she said on Friday. “This building is uplifting and inspiring. It allows people to dream, and I want everyone who walks through those doors to feel like they can dream and aspire to be anything they want to be.

“We have incredible faculty,” Holman said. “A lot of them have performed all over the world. They teach at big universities and they know this community.

They offer lessons in Suzuki Violin, Cello, Chamber Music, Alexander Technique, Music Literacy, and there will be master classes, lectures, and concerts. Eventually there will be a music technology program, jazz lessons and organ lessons. There is a need-based scholarship program that the Dean is working on, so everyone can afford to take classes.

“I really feel like a seamstress, sewing all the great things that are here together — and adding a centralized, beautiful location and maybe adding a touch of this and that,” Holman said.

Whether or not students become professional musicians, “training and exposure to music has been known to help in all fields and professions,” she said. “It’s for the Quad Cities. Feel free to come to us with what you would like to see offered and any suggestions.

Dean John Horn of Trinity Episcopal Cathedral is delighted to have the Dean’s School in the historic building, which is owned by the cathedral. Originally built as a residence for the Episcopal Bishop of Iowa, the diocese moved the bishop to Des Moines in 1945. Since then, the building has been occupied by the cathedral’s deans (or senior pastors) of the Trinity, until 2009.

One of Holman’s star cello students, Aviana Holst senior of North Scott, has spoken out in favor of the new school.

“I’ve been excited about this ever since Hannah told me it was a possibility, and I can’t believe this is finally happening,” she said. “I was a music student in the Quad Cities for 11 years, starting when I was a piano student at age 7.”

“What I missed was some sort of centralization that would make it easier for people to come together and make music,” Holst said. “There was no place where I could easily access high levels of education, like I could in Iowa City or Chicago.

“What I find so amazing about the deanery is that they are going to provide that for the students here, for the next generations of students who will come after me,” she said.

It’s also difficult to access classical music, especially by renting or buying instruments, Holst said. “It can prevent a lot of students from reaching their full potential. I know I wouldn’t be where I am today without the incredible generosity of so many of my teachers and others who loaned me instruments and everything you need to get to where you want to go. .”

“Scholarships are vitally important in helping people gain access to classical music, and they are voices we need for the future of music,” she added. “We need more diversity and people from all walks of life to embrace classical music in the future.”

“Even though it’s snowy and cloudy, for us it’s a clear, sunny day,” said Joseph Lohmuller, chairman of the deanery council. He had Holman perform several concerts at his home, along with other QCSO musicians.

“The Board is especially grateful to Steve Wiese, with Extensive Services, LLC, who completed the renovation of this outstanding facility and truly brought it back to life,” Lohmuller said. “He really shared the vision of how we can have a space to serve our students and the community.”

At one point there was talk of demolishing the building, he noted. Holman brings extensive expertise and “the highest level of education and skill” to the new school.

Wagle, the executive director, “has truly done an outstanding job and brings the credentials of his music degree from Brown University, and is also an accomplished singer and pianist,” Lohmuller said. “He’s also in a master’s program at the University of Iowa in music education – which fits perfectly with his role here with our school.”

Rishi Wagle said the Bechtel Trust provided a $50,000 grant for the project earlier this month and fundraising for schools began in late 2020.

They hope to hold small concerts in the main hall, with a beautiful grand piano donated. The 1910s piano was donated by Ina Clegg of Chicago, who had no prior connection to QC but heard about the school through social media, Wagle said.

“I sort of took a bet on it, in a way,” he said, adding that he had never seen anyone before and it was only settled on Thursday. “Sounds good now.”

One of the professors from the deanery (Ben Lorentzen from the QCSO) will lead a small student recital (viola and violin) on Saturday 22 January. Other local teachers include Scott Sund (cello) and Jenn Swift (piano), Wagle said.

The deanery does not charge its faculty to use the building for private lessons and recitals, he said. “We really want to make it an accessible space. We want it to become a centralized home for music education, and I think our faculty members, many of them, are excited about the opportunities for collaborations with other musicians, other teachers.

“This space and the resources we have now as a school, we are able to offer group classes,” Wagle said. “Many private teachers teach from home. It doesn’t give them the resources or the access to organize larger events. »

Holman said there will be some overlap with QCSO’s long-standing private tuition program, with instructors, but the Dean will supplement what is offered.

“Some students may hear the same thing, but say it in a different way,” she said. “I think I love that we have a location, and a beautiful location. And they’re starting to feel at home here and form new relationships.

Holman did not teach under the QCSO course curriculum, but some professors teach in both. You can find a full list of Deanery faculty, with biographies and course costs, on the school website.

Members of a famous music school were airlifted out of Afghanistan. The coordination effort took place at Otis | South Berkshires