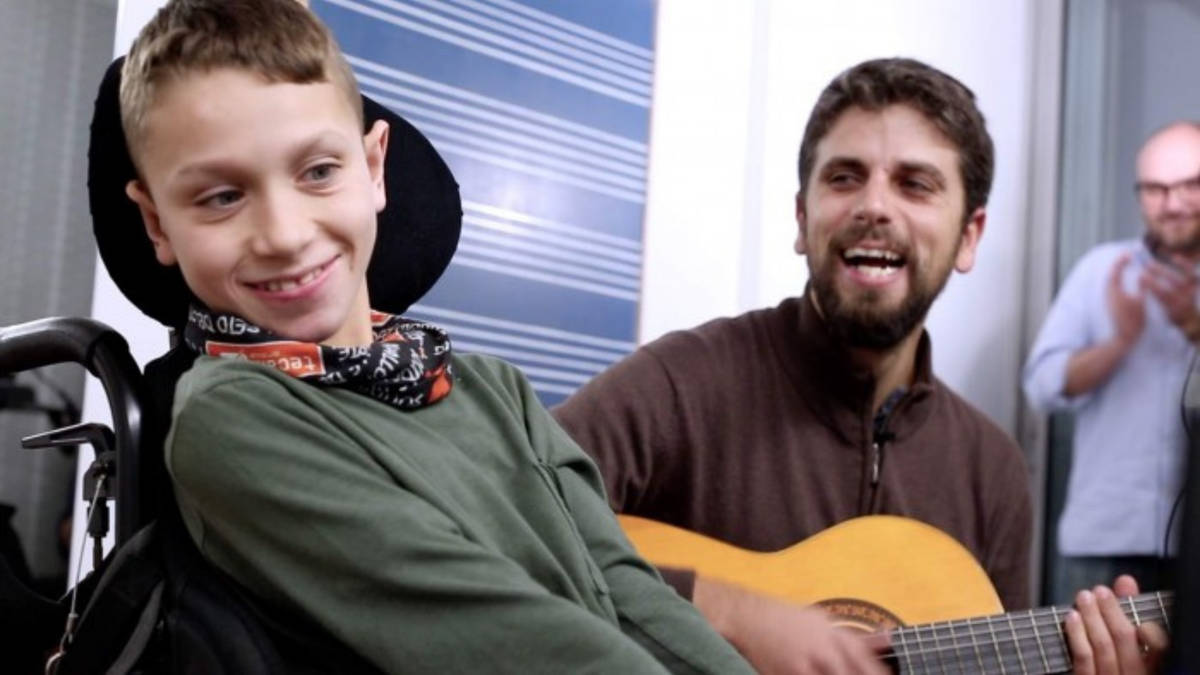 Revolutionary Instruments Disabled Musicians Can Play Using Only Their Eyes

Innovations in music technology have enabled people with disabilities to learn and play music without barriers.

According to a study by Arts Council England, only 1.8% of music industry professionals identify as having a disability. This contrasts starkly with the nearly 19% of the UK workforce who are considered disabled under the Equality Act 2010.

It’s no surprise then that a career in the music industry has always been considered out of reach for people with disabilities.

Networking events, the stages themselves, and even the instruments remain problematic barriers for this community.

Here are just a few examples of the technological advancements that have strived to make music creation accessible to everyone.

The Harp of the Eyes

The development of this revolutionary modern music technology began in 2010, when Zacharías Vamvakousis, musician and software developer, was studying for his Masters in Sound and Music Computing at Pompeu Fabra University in Barcelona.

A musician friend of Vamvakousis was involved in a serious motorcycle accident and it was unclear if he would be able to play music again. Realizing that there was no musical instrument accessible to people with quadriplegia at that time, Vamvakousis began to develop the EyeHarp.

The instrument is specially designed so that those who are diagnosed with conditions such as cerebral palsy, amyotrophic lateral sclerosis, muscular dystrophy, upper limb amputation or spinal cord injury can learn and enjoy music with their eyes. It is also suitable for people with intellectual disabilities.

In 2019, the project developed its social responsibility component with the creation of the EyeHarp association; a non-profit social enterprise, whose mission is to improve the quality of life of people with disabilities, by giving them access to all the advantages of music education (improvement of language and memory, development of creativity, increase in self-esteem, etc.).

Read more: This marvelous orchestra proves how classical music can embrace the social model of disability

The EyeHarp is the only instrument that can be played using only the performer’s eyes. The instrument was created to give full access to musical education to a group of people who until recently had very limited access to music.

To play the EyeHarp, musicians simply need to install the software and use it with an eye tracking camera. Then, by watching the notes on the screen, illustrated by a colorful pie chart like a circle, performers can create beautiful music.

Designed with musicality in mind, the EyeHarp offers the “same expressive qualities as any traditional instrument”.

And to promote accessibility to music creation, the basic version of the EyeHarp is free to download, with other pricing options available for the full version.

In 2012, the Closing Ceremony of the Paralympic Games in London included a performance by the British Paraorchestra – the world’s first professional ensemble of disabled musicians.

Since that performance, the UK has seen the establishment of disabled-led youth orchestras, both regional and national.

The first of its kind, “National Open Youth Orchestra”, was founded in 2018 by Bristol-based OpenUp Music, which helps “transform music-making for young people with disabilities nationwide”.

The orchestra helps musicians with and without disabilities aged 11-25 to rehearse and perform together as members of a pioneering inclusive ensemble. In addition to acoustic instruments, members can also make music using the ‘Clarion’.

The Clarion can be played with any body movement, including the eyes.

Matt Griffiths, CEO of Youth Music (which funds Open Up Music) told ClassicFM.com: “Digital technology is an integral part of music and even music education more broadly. It often plays an even bigger role in supporting disabled musicians.

“We have seen some positive innovations in assistive music technology in the UK, particularly over the last ten years, including the Clarion developed by Open Up Music and the work of Drake Music.”

Although these positive innovations have been seen in the UK and abroad, they are particularly attached to universities in developed countries, and Griffiths suggests that there is still a long way to go before musical creation is accessible to everyone.

He adds: “The challenge now is to integrate these technologies, available at scale, at an affordable cost with increased knowledge on the part of the workforce on how to use them effectively.

“This will ensure greater equity in music creation, especially for musicians with disabilities and others who too often face barriers to accessing it.”