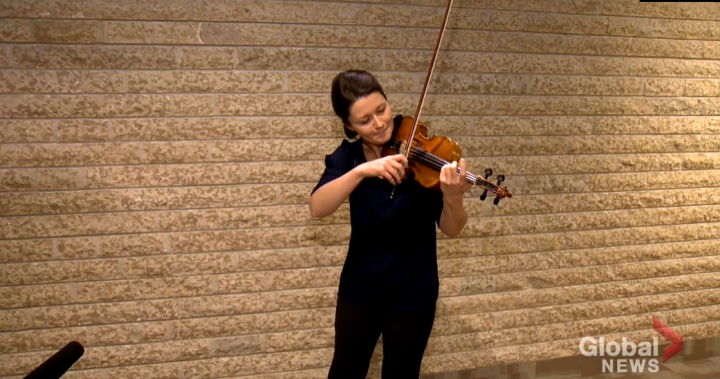 The University of Saskatchewan is hosting a four-part concert series featuring a collection of historic string instruments.

This is Discovering the Amatis, a quartet made up of two violins, a viola and a cello.

“They are made by this family of luthiers – Amati,” explains Véronique Mathieu, associate professor of violin at the University of Saskatchewan.

“It’s the family name of the makers and it’s a craft that has been passed down from father to son,” she added.

The instruments were handcrafted in the 1600s.

According to the university, the instruments are now part of the fabric of Saskatchewan.

The story continues under the ad

“There was this guy, Stephen Kolbinson, who was a grain farmer from Kindersley, Saskatchewan. And in the 1950s, he developed this curiosity for old Italian instruments and he started traveling the world in search of instruments to acquire for his collection,” began Mathieu.

“When Kolbinson had the collection assembled here in Saskatchewan, since he was not a musician himself, he began to look for a purpose for these instruments. So, at the time, he had a close friend, Murray Adaskin, who is a fairly well-known figure in the Canadian musical landscape.

Indigenous artists contributing to truth and reconciliation through music and dance

According to Mathieu, the university bought the instruments from Kolbinson and Adaskin in the late 1950s and they have been at the school ever since.

The associate professor said hosting the concert series is important in order to show the general public the beauty of the instruments.

“It really gives the public a chance to experience these instruments, hear their individual personalities and get to know them,” she said.

And it was just as important for Mathieu to include leading guest artists to showcase the music.

Edmonton Symphony Orchestra musicians Robert Uchida and Rafael Hoekman played instruments at the series’ first concert last month. They both said it was a privilege.

The story continues under the ad

“The violin I played is a Nicolo Amati,” Uchida said. “And the violin, even at one point, gave the performance of Beethoven’s Violin Concerto after World War I in the UK. So it’s amazing to get your hands on this piece of history and to become, for a moment, part of the history of the instrument.

“It just had an incredible range of colors and sounds and qualities that are, you know, obviously in the making of a master craftsman who created it. But also in the several hundred years of manufacture. And it’s an amazing experience to have,” added Hoekman.

Mathieu said she was honored to be the person designated to oversee the historical instruments.

“I think it’s been very important for the community to have these instruments, especially for the musical community, and also as a provincial treasure, if I can say that.”

The next concert will be on October 23 at the university’s Convocation Hall. Tickets can be purchased on their website.