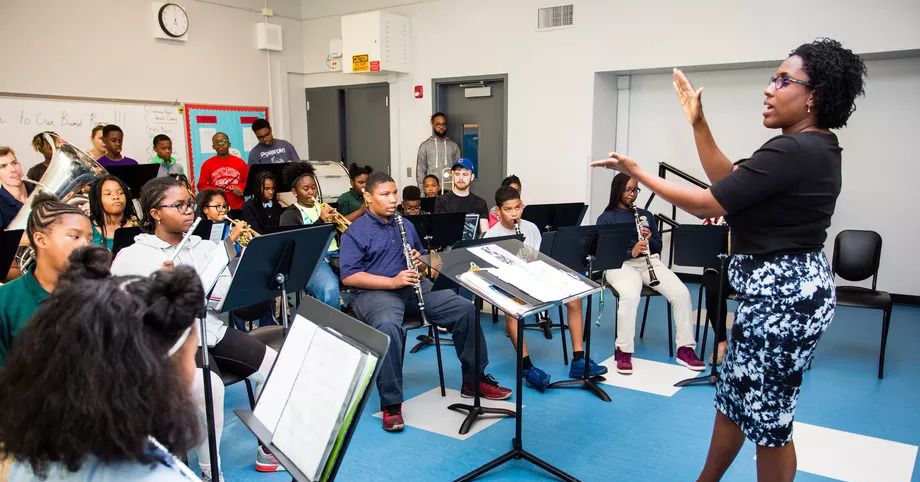 A shy smile lights up the face of Xavier, 11, who explains that he feels soothed by counting the music in 4/4.

His teacher has noticed his musical prowess and he enjoys hearing the crowd’s applause after a performance, said Xavier, who plays a small tuba-like instrument called the euphonium as a student at the new South Side space in the People’s Music School in Bronzeville.

He walks about six miles each way, three times a week for his music lessons, which has contributed to his eclectic musical tastes ranging from Chance the Rapper to “Carol of the Bells” to Beethoven’s Symphony No. 9.

Another People’s Music School student, 14-year-old Remington, is entering his fifth year playing saxophone (families have asked that the students’ last names be omitted for privacy reasons), and he is excited to play a day in a marching band.

He and his family walk about 10.5 miles from his Roscoe Village high school to Bronzeville three times a week as soon as the last bell rings – and he’s happy to commit.

He said he appreciates being able to understand music better when he hears it because he can read and play music.

He likes to play the saxophone because of its range – high or low, blues or jazz.

“You can learn to play another instrument and read music from that instrument as well,” said Remington, who is working on keyboard fluency at home through a book his sister gave him.

Better yet, Remington wants to “feel that feeling” the music gives him, he said, shaking his shoulders as if he had goosebumps.

“I really love music,” he said.

That kind of excitement underscores the mission of the 43-year-old popular music school: its after-school programs are free and require hours of family volunteering, and its intense level of music education is designed to spark children’s creativity, life opportunities, critical thinking, desire for excellence, commitment to hard work and sense of community.

“To achieve musical excellence, you have to be consistent, resilient, work hard and show yourself,” said Natalie Butler, dean of learning and teaching at the school of music, who serves as director. group leader, team leader, recruiter and planner for the Deep South Program.

For the next two to three years, the People’s Music School Greater South Side program will operate out of Bronzeville Classical Elementary School at 8 W. Root St.

Music school leaders aim to find a permanent home on the South Side when their lease ends at Bronzeville Classical, a Chicago public school selective enrollment school that operates in a repurposed building that previously served students from the north side of Robert Taylor Homes.

“Across the city, especially in black and brown neighborhoods, enrichment opportunities outside of school can be low,” Spicer said. “The average student retention at People’s Music School is seven years. Families engage with their children. They primarily serve children of color. Their high school graduation rate is 100%. It is a successful result.

It’s a result that coincides with Bronzeville Classical School’s mission to be innovative, creative and, as Spicer puts it, “to educate the whole child.”

The Bronzeville Classical School will let the People’s Music School use its vacant second floor, filled with pristine classrooms and bright blue lockers emblazoned with miniature flags of countries around the world.

Bronzeville Classical, which opened in the fall of 2018 and is now home to K-3 classrooms, will eventually utilize empty upstairs space as it builds a new grade level each year through 8th grade.

Registration at the People’s Music School is based on a lottery system. No student audition or musical knowledge is required to apply for the available slots, which differ in number depending on the age groups of the children and the instruments available and needed to fill the groups and ensembles.

Students attend music school for up to nine hours a week, getting music theory and private and group lessons. They pass jury performance reviews.

The music school asks families to volunteer up to 16 hours per year for each student enrolled. Families provide services such as cleaning, escorting, organizing events, setting up roofs or Salesforce software strategy – maintaining a founding principle of the music school.

For the past three years, the People’s Music School’s South Side program has operated out of the Gary Comer Youth Center. After-school enrollment at Comer has grown from 20 to 80 students. The growth spurt left Comer overcrowded, with students practicing in closets, hallways and meeting rooms.

With the Bronzeville expansion, the People’s Music School will operate out of a total of four locations, including its headquarters in Uptown, as well as Albany Park and Back of the Yards. The school collectively enrolls 950 students between the ages of 5 and 18 – 45% of whom are Latinx and 42% African American – and aims to reach 1,000 by 2020.

The school’s founder, Rita Simo, immigrated to the United States from her native Dominican Republic 63 years ago as a Julliard piano scholarship student in New York.

Since music education was free in much of Latin America, Simo was surprised to learn that it was largely exclusive and expensive in the United States, and she set herself the task of correcting this. which she considered an injustice. Her life story is detailed in the book “Music is a Gift: Pass It On”, by Cynthia Willis Pinkerton.

Simo, now in his 80s, remains a member of the People’s Music School board. She chose Uptown as the school’s home base because of the neighborhood’s diversity. She opened the school in 1976 with a piano donated from a rented former beauty salon.

The school, which now has its headquarters at 931 W. Eastwood Ave., employs 60 “teacher artists” who specialize in instruments ranging from piano and strings to horns and percussion.

The school’s $2.4 million budget is a testament to success. It’s a financial turnaround from a $200,000 deficit just five years ago – a feat overseen by fundraising and budget crunching from President and Artistic Director Jennifer Kim Matsuzawa.

“Instruments are expensive,” Butler said. “Probably 60% of our inventory [of all instruments] comes from donations. The rest we buy. For example, snorkels can cost $3,000.

To note: The People’s Music School accepts donations from the public. To learn more about the school or to find out how you can help support its programs, visit www.peoplesmusicschool.org/donate.