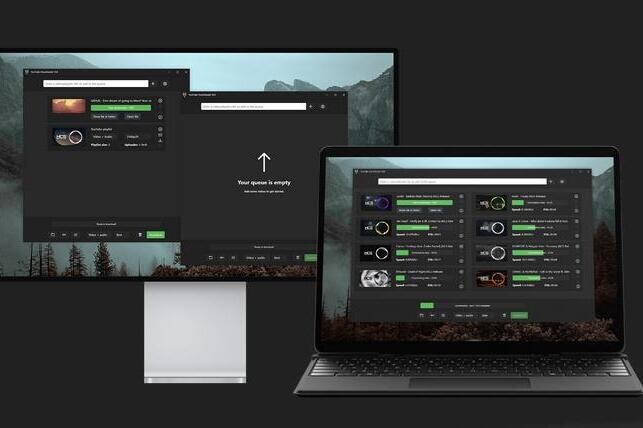 Open Video Downloader is a free application for Windows, Mac and Linux that downloads videos from YouTube and others using youtube-dl

Open Video Downloader is a cross-platform youtube-dl client with GUI, made in Electron and node.js. Remember that youtube-dl is a simple free program to download videos from almost any website with the command line.

Among the main features of Open Video Downloader or youtube-dl-gui, it stands out that can download from various platforms (YouTube, Vimeo, Twitter, and many more, depending on the creator), download multiple videos and playlists and channels at once. Specifically, up to 32 videos can be downloaded synchronously.

In addition to that, youtube-dl-gui, which is already in version 2.4.0, allows you to select the resolution and format in which you want to download, in addition to downloading private videos (so far only tested on YouTube). It shows you the download size on your system and the app keeps ytdl update automatically. If you want less hassle, you can download music from YouTube with Jdownloader and the websites we recommend.


This application is tested on the WindowsLinux and MacOS and its creator said that “if you decide to build for another platform, it may or may not work.”

If you are on Windows, you must ensure that the Microsoft Visual C++ 2010 Redistributable Package (x86) it’s installed. As for the dependencies of this application for MacOS and Linux, it is Python, although they warn that in the operating system for Apple it comes pre-installed and that on Linux “it almost always comes pre-installed”.

To use it, you must download the installer or executable corresponding to your system and paste a link in the upper box which will appear on the screen of this application. Wait for the app to gather all the necessary metadata, then tap “Download” and the videos will be saved to your download folder.

On the other hand, some of the expected features include selecting individual audio and video codecs (in advanced mode), offering a list of all audio qualities, and support for downloading live streams.

A little history of youtube-dl In 2006, the year YouTube was acquired by Google, García, the creator of youtube-dl, lived in a town in the region of Avilés in Asturias. And, despite the proximity of one of the principal cities of the Principality, the district in which he lived lacked Internet access by cable and ADSL. Its only option to connect to the internet went through a 56k modem which gave it a download speed of 4KB/s. A situation that made it “painful” to access any YouTube video: thus, for example, a video of only 10 MB would take 40 minutes to load.

Faced with this situation, García became interested in a solution that would allow him to download the video directly to the hard drive. And, if possible, with a download management system that would allow you to resume them.

The software was born as a command line program written in Python, more precisely in 143 lines of code (plus comments). It was released on SourceForge (GitHub didn’t exist yet) under MIT license on August 8, 2006. Before the end of the year, Linux.com devoted an article to youtube-dl, which made it quite a popular program.

Music school is changing the world, one Rockstar at a time – Cross Timbers Gazette | Denton County South | mound of flowers