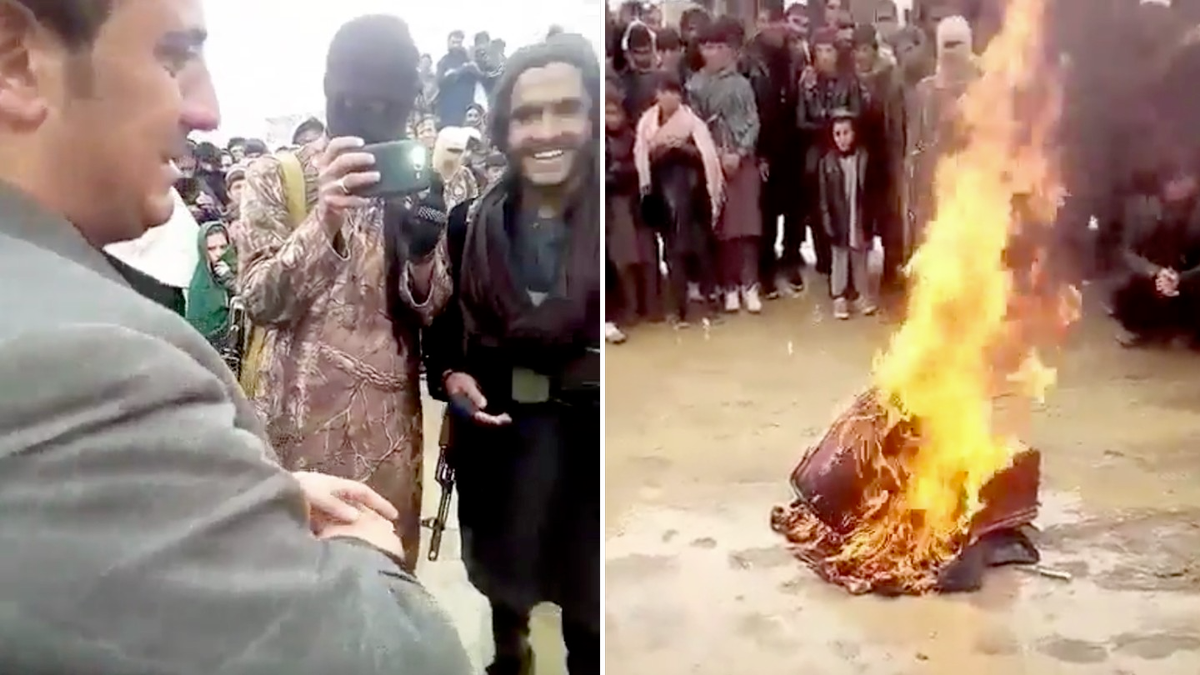 Musician cries as Taliban fighters burn his instruments in public

The man was forced to watch as his livelihood was set on fire. PHOTO: TWITTER

The Taliban forced a local musician to watch as they burned his instruments and mocked him in front of a large crowd.

The video shows the musician shedding tears as he watches his harmonium and drum burn as Taliban soldiers preach to a crowd.

He appears to have been mutilated by Taliban soldiers as the arms and back of his coat were badly torn.

The footage was recorded in Paktia province in eastern Afghanistan and went viral after being posted on social media on Saturday.

In Afghanistan, local bands are mostly made up of a singer playing the harmonium and drummers, and perform mainly for weddings and birthdays. They were banned during the first cycle of the Taliban regime, from 1996 to 2001, but they still made a rapid comeback and their business flourished after the Taliban was ousted.

Islamist extremists were notorious for their hatred of music during their first reign in the late 1990s, when Kabul was littered with films from banned cassettes as a warning. However, some musicians continued to play in secret, but they were severely punished.

In the video, the Islamists can be heard preaching to the crowd and pointing to the musician staring at his instruments being destroyed.

The first Taliban soldier can be heard saying, “What is the person who plays an instrument, and what should be his fate?” he asks the people gathered around.

A second Talib begins to insult the musician and asks the crying man to repeat 10 times after him: “I will never do this job again, and I am a pimp”, and the crowd laughs.

“Look, now it’s burning; What is that? It’s just animal skin. It’s a shame. May God forgive us,” said another Taliban soldier. The crowd, including the musician, can be heard saying “Amen”.

The Taliban soldier adds: “Now people in the region should know that this will happen to those who play drums and other instruments.”

He then tells the musician to say, “I’m a scum, God damn me.”

“Everyone [musician] must know that it will be their end”, whispers the musician at the end of the video.

The group’s new crackdown on local musicians will force many to leave the profession or work underground and risk being captured by the Taliban.

The alliances urged the Taliban to reverse the ban. PHOTO: Sardar Shafaq/Anadolu Agency via Getty Images

The group claims that almost all musical instruments are sinful and that any non-religious song and music is against its strict interpretation of Islamic law.

A series of women-led protests erupted in Kabul on Sunday after a woman was shot dead at a checkpoint in the capital last week after arguing. The Taliban dispersed the demonstrators using tear gas.

A romantic concert at the Bloomington Courthouse will feature unusual instruments