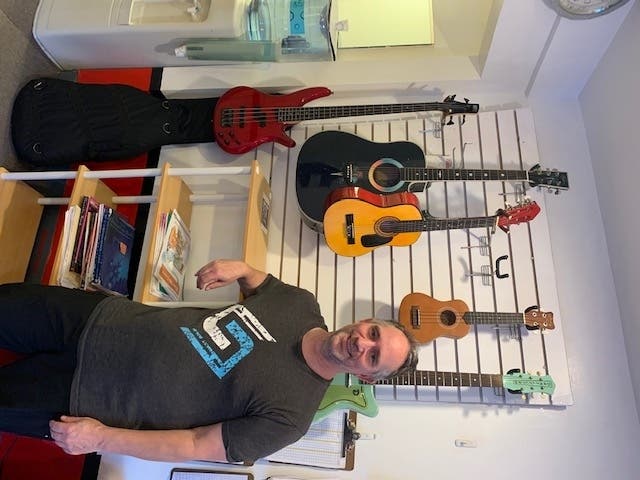 Danvers, MA – Coming from Berklee College of Music, Darren Muise was trained in music education in the early 1990s. After landing his first teaching contract at a local music store, Muise began to consider to open his own school. That was in 1995. The Music Connection has grown steadily since.

“We’ve weathered a lot of storms over the past 26 years or so,” Muise said, “the biggest being in 2008, when people were losing their jobs, their homes, everything. The first thing that would go would be something like Music lessons. We took a big hit back then, and we kind of downsized during that time and regrouped, made ourselves a little smaller so that we could still establish ourselves. “

For the past 10 years, The Music Connection has hummed at a pretty steady pace. But when 2020 brought about a global pandemic and national lockdowns, Muise’s first thought was to “pivot.”

“When 2020 arrived, we were introduced to Zoom classes,” Muise said. “That’s what we did. We said ‘obviously we have to close our classes in person, but we’re going to teach online.’”

Almost two-thirds of The Music Connection’s student base have expressed interest in continuing with online classes, with the remainder choosing to wait until school returns in person.

“So we pivoted in line. It worked pretty well during that time. We survived pretty well,” Muise said. “In July of last summer, we started teaching in person. We did what we needed to do to make it happen.”

Throughout this period when school was largely virtual, even as some older students began to return to socially distant in-person classes, new virtual students began to spring up. And at this point, with more than a year and a half of the pandemic behind them, the school is almost fully back in person.

“Personally, our philosophy is that we think it’s best for people to be in a studio,” Muise said. “There are so many distractions in a home. But if people wanted to stay online, we obviously honored it. But most people have come back. And our numbers are almost back to what they were before the pandemic. . “

Even with most of the students now back in person, Muise doesn’t see the Zoom course component disappearing.

“Now we have this option that if a student can’t take the time for their lessons, they can zoom in on their lesson,” Muise said. “Zoom is going to become part of the fabric of what we do in a number of different ways.”

And while Zoom provided an important platform for the school to pivot and maintain its connection with its students, the transition has not been smooth for everyone.

“The biggest takeaway is probably that the real kids – five and six – didn’t do well on Zoom,” Muise said. “It was probably one of the most important things we discovered.”

Despite the challenges the pandemic presented to The Music Connection, Muise found that the challenge of adaptation ultimately allowed him to find new ways of doing things.

“It created new opportunities for us to teach on Zoom, so it’s a positive thing,” said Muise. “It was also an opportunity for us to reassess our business.”

Through this time of difficult communication and fervent adaptation to a whole new environment, Muise is grateful that The Music Connection was able to find a way to survive.

“We’ve been through some crazy storms in our 26th birthday,” said Muise, “and we’re very proud to always be around talking about that or teaching our lessons, doing what we’re doing, seeing what that the future holds. “