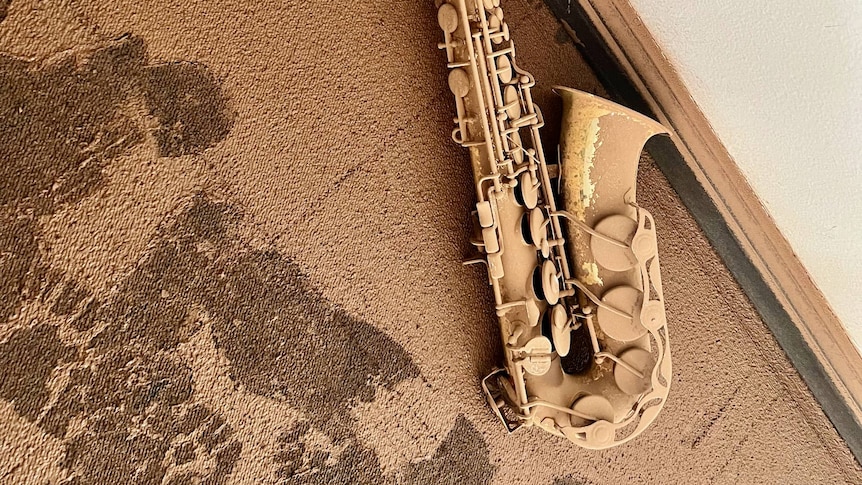 For some, the only sound they associate with Lismore on February 28, 2022 is the relentless artillery of rooftop rain.

It’s the gurgling of muddy brown water gulping down homes and the clatter of appliances in the Wilsons River washing machine.

It is the calls for help from the cavities in the roof and the crackle of the tinnies that come to the rescue.

For Lismore composer and multi-instrumentalist Tilly Jones, the sound of the Flood is something best expressed through an orchestra.

Ms Jones wrote a musical piece called Resounding, inspired by the destruction she witnessed on that late summer day and the desecration of the Northern Rivers Conservatorium in Lismore.

She was encouraged by her uncle Christopher Latham who runs a project called the Flowers of Peace, which measures the cultural cost of war through music and painting.

“I don’t think I’ll ever be able to fully process it,” she says.

“But it kind of helped me deal with the loss of community a bit, especially with the conservatory.

“I was helping out there the first day after the flood when we threw in hundreds and hundreds of instruments, including some of my own.”

Ms Jones says the first half of the play is about the flood, the second half is a tribute to everyone involved in cleaning up the aftermath.

“I think it’s a really big challenge to translate something of this magnitude into music,” she says.

“[But I wanted] to write a play to give to my community.”

Ms Jones says the end goal is to bring together local musicians – with their newly donated instruments – to perform the piece in the renovated conservatory building.

Hundreds of instruments lost to floods

Anita Bellman stands on the emptied first floor of the Northern Rivers Conservatorium in the Lismore CBD.

She explains that the day before the record flood, staff and members of the conservatory moved everything to the first floor, where it had been out of danger during the 2017 flood.

Their efforts, they soon realized – like those of so many others – were ultimately in vain as they watched the Wilsons River rise beyond all predicted heights to 14.4 meters on February 28.

The historical and freshly renovated building was destroyed along with hundreds of instruments.

“It looked like a giant had picked up the building and just shook it a bit,” Ms Bellman said.

“We probably lost, in total, well over 150 instruments.

“Any instrument you can think of, we’ve lost.”

Resounding gives the gift of music

When Rachel Hocking arrived at Lismore Conservatory, she was driving a van filled with hundreds of donated instruments.

The initiative started after the 2009 Black Saturday bushfires.

“Often, replacing a musical instrument is one of the last things on the list to replace, because the immediate needs need to be met,” says Dr. Hocking.

“But for musicians who make an income from it or play it every day, it’s a big loss.

“It’s something normal they were doing that they lost.”

Dr Hocking says the response to this year’s flood disaster on Northern Rivers has been massive.

“We’ve had over 800 pledges through our website and more from people who have just dropped off instruments,” she says.

When Stella Rapmund’s home in South Lismore was inundated by over a meter of floodwater, she lost her precious Maton guitar.

“I said the three things were my cat, my dog ​​and my guitar that I hoped to save from the flood,” she says.

“I have the cat and the dog but not the guitar.”

The instrument has always been an important part of her life, including during her recovery from breast cancer in 2019, when it became a way to exercise her arm and hand after surgery.

“I felt guilty for not saving him,” Ms Rapmund says.

Thanks to Resound, Ms Rapmund received a deep blue guitar which she describes as bringing a ‘colourful light’ into her ‘muddy, dark world’.

“With the music and the guitar, it’s like the Christmas lights turn on,” she says.

“I pull out the guitar, the lights come on and when I’m done the lights go out.”

From mud to music to the ears

On the top floor of the newly renovated conservatory, dozens of musicians sit in a sun-drenched room, instruments in hand.

The conductor raises his baton and the first soft notes of Mrs. Jones’ Resounding sound.

The song builds and other instruments ring out, painting a soundscape of pouring rain, panic and alarm, tinnies coming to the rescue.

Mrs. Jones is close to the conductor, on the bass clarinet.

Dr. Hocking sits behind a timpani awaiting the conductor’s signal and Ms. Rapmund is part of a quartet of guitarists on a raised stage.

The orchestra plays and the music reaches a crescendo.

The melody is one of hope, optimism and change.

Local news straight to your inbox

ABC North Coast will air a summary of the week’s news, stories and photos each Friday. Sign up to stay connected.