Korea Week in Chennai: traditional music and instruments in the spotlight

Traditional Korean music and instruments were at the forefront of this year’s Korea Week celebrations in the city. On Friday, a folk ensemble of two women takes the stage

Traditional Korean music and instruments were at the forefront of this year’s Korea Week celebrations in the city. On Friday, a folk ensemble of two women takes the stage

Continuous Jishin. This old Korean proverb translates to “understanding the new by learning old things”. Traditional instruments are simply a gateway to the future, believes ID, a Korean band whose sound is a delicious dance of traditional wind instruments like the piri, taepyeongso and saenghwang. As the Sir Mutha Venkata Subbarao Concert Hall fills with a timbre reminiscent of an era unknown to all of us, it is peppered with familiar guitar riffs and keyboard interludes. That’s what ID thrives on: creating contemporary sounds through traditional means.

The group recently performed in Chennai as part of the city’s Korean Week celebrations, organized by the Korean Cultural Center New Delhi and the InKo Center in association with the Consulate. Later this week, a two-woman folk music group called DUO BUD will perform in the city, ahead of the closing day celebrations. ID derives its music from Korean folk songs and legends: it’s something that has made its music stand out since the band formed in 2015. Korean song became the motif of our song, ‘Yeoumbul Arari’,” says leader Nam Kimun.

Their song “Nanani” was inspired by “Nanani taryoung”, a traditional work song sung by women when harvesting oysters on the Incheon coastline. “We intended to depict the city at night with neon lights in this song,” he continues. However pee (small bamboo reed instrument) was the instrument in which the founding members of the group specialized, taepyeongso (double reed instrument of the oboe family), saenghwang (free reed mouth organ), guitar, drums, keyboard and janggu (an hourglass shaped drum) complete the set. The group’s next goal is to collaborate with Indian folk musicians. “

While ID’s soundscape oscillates between traditional and contemporary, DUO BUD relies on folk sounds – it’s the result of a healthy battle between janggu and gayageum (a plucked zither with a minimum of 12 strings). Also formed in 2015, when DUOBUD debuted, it was rare to find a female duo. Percussive sounds were only considered background music, not lead. “Departing from the existing style of wild and intense percussive elements, we focused more on the delicate and lyrical tone of Korean sensibility using characteristics of the gayageum,” explains Jinhe Lyim who plays the gaeryang gayageum (which has 25 strings, a modernized version) overall. 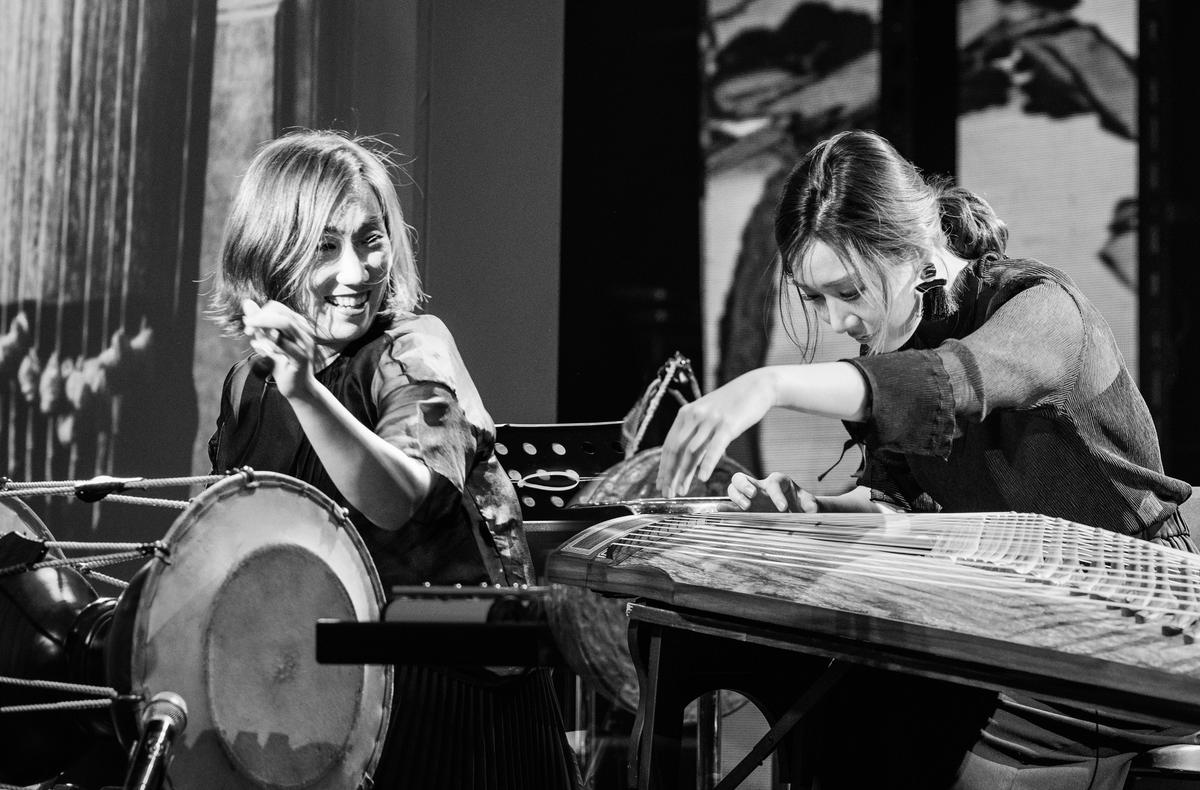 Janggu is a drum played with a stick, and it is the only percussion instrument that can be tuned to produce pitches, explains Sora Kim. “For better accompaniment with the timbre, mood and rhythm of each piece of music, we selectively used janggu Pungmul (peasant music) and janggu Musok (shamanic music). The group’s repertoire is largely inspired by Nature. “Nature is always nearby and provides comfort but can be subconsciously unaware like the moon in the night sky and the tree in front of the house and by reinterpreting Korean traditional music, we want our songs to be there for people who have need comfort in everyday life,” adds Jinhe.

ID admits to being in a constant struggle to find the balance between preserving traditional music and adapting it to contemporary times. “Traditional music has its own virtue. We just want to look at it from more diverse angles and share the results with more people,” Nam says. As K culture is getting stronger and stronger across the world, Jinhe believes that traditional K music, dance and crafts are also being accepted in the global market.

Back in Chennai, she says the public is invited to explore this correlation. “For audiences new to traditional Korean music or K-pop fans, comparing and contrasting Indian and Korean music or K-Pop music and DUO BUD can be fun,” says Sora. .