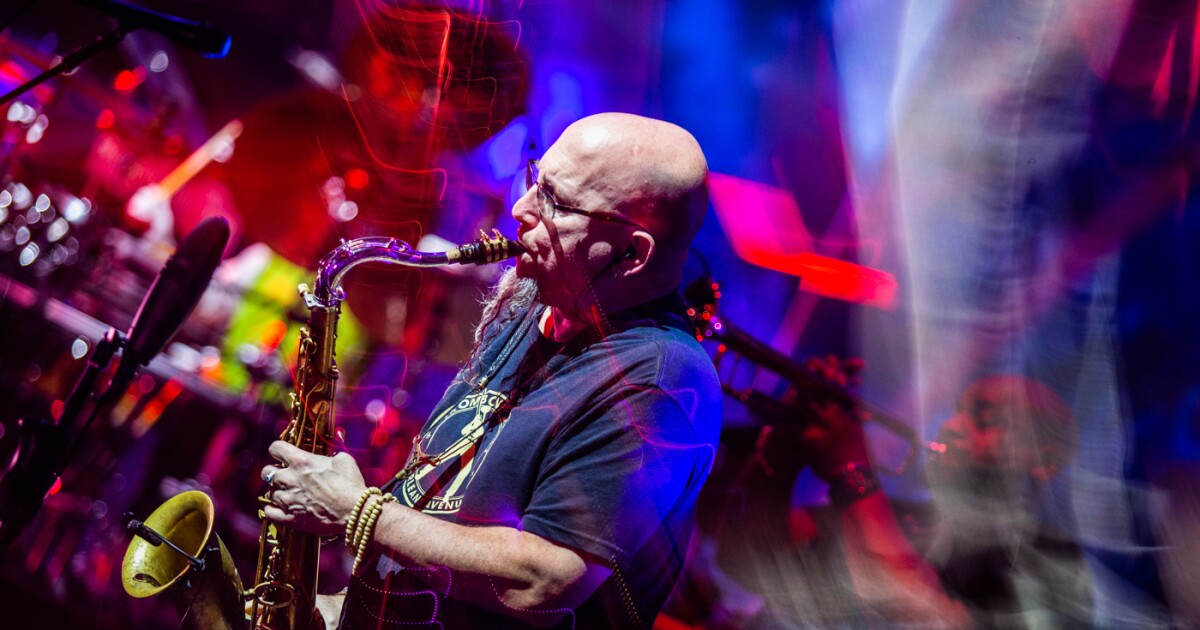 When it comes to a complex project, it’s best to have the right tools for the job and know how to use them. On his new album Between Dream and Joy, multi-instrumentalist Jeff Coffin uses 13 instruments, plus vocals, percussion and even a bottle of soda. He also employs a number of talented special guests on this funky and fun collection, each of whom is positioned to optimize his skills.

Coffin’s history with the Dave Matthews Band and Bela Fleck & the Flecktones has trained him to find the right music to play in the right places. When it’s his chance to conduct, Coffin uses his versatility to bring out elements of folk, rock and especially funky soul music.

The title song on Between Dream and Joy opens with the sound of an ice cream truck before Keith Carlock’s deep groove drum beat introduces a wide range of instruments from Jeff Coffin’s collection. The slow-burning, cinematic song finds Coffin playing tenor, soprano and baritone saxophones, clarinet and bass clarinet, melodica and flute, with which he performs a soulful – albeit brief – solo. Special guest Marcus King focuses on slide guitar, giving the song a bluesy heart.

“Ruthie,” written for the late Supreme Court Justice Rush Bader Ginsberg, ups the tempo and funk factor with Coffin’s flute taking center stage with a soulful, gently growling riff. Jeff Babko, Coffin’s partner in the newly formed Band of Other Brothers, is the special guest here on Fender Rhodes and the Prophet 5 synthesizer. As cheerful as it is funky, it could be the theme for TV’s next big crime show.

The nostalgic soul feeling continues with “Bird and Magic,” written for basketball stars who battled for NBA championships in the ’80s. organ of young soul and funk star Nigel Hall. The song is more of a show of confidence than a quick break, so give this game to Larry Bird’s Boston Celtics.

Snarky Puppy Michael League bassist and frontman teams up with Coffin on “Vinnie the Crow,” one of the more modern numbers with the addition of turntable master DJ Logic. The anthemic blues rock energy shifts to a dreamlike trance, evoking the lost time feelings of the pandemic shutdown. It’s joyful and also thoughtful, giving a sense of appreciation and eagerness for the future.

The impressive roster of guest musicians also includes Snarky Puppy guitarist Bob Lanzetti and blues guitar legend Robben Ford, as well as top modern bass players Chris Wood, Felix Pastorius and Vicente Archer. Coffin inspires the exuberant playing of all his bandmates and this is evident on Between Dream and Joy.

Jeff Coffin is an artist in perpetual motion. He recently launched virtual music education site The Sax Loft with fellow sax stars Tia Fuller and Kirk Whalum and the Boston Sax Shop. Always on the move, Coffin gets his fans and fellow jazz stars moving.

The New Cool airs Fridays at 9 p.m., hosted by Abe Beeson and produced by KNKX Public Radio in Seattle, Washington. LISTEN ON DEMAND