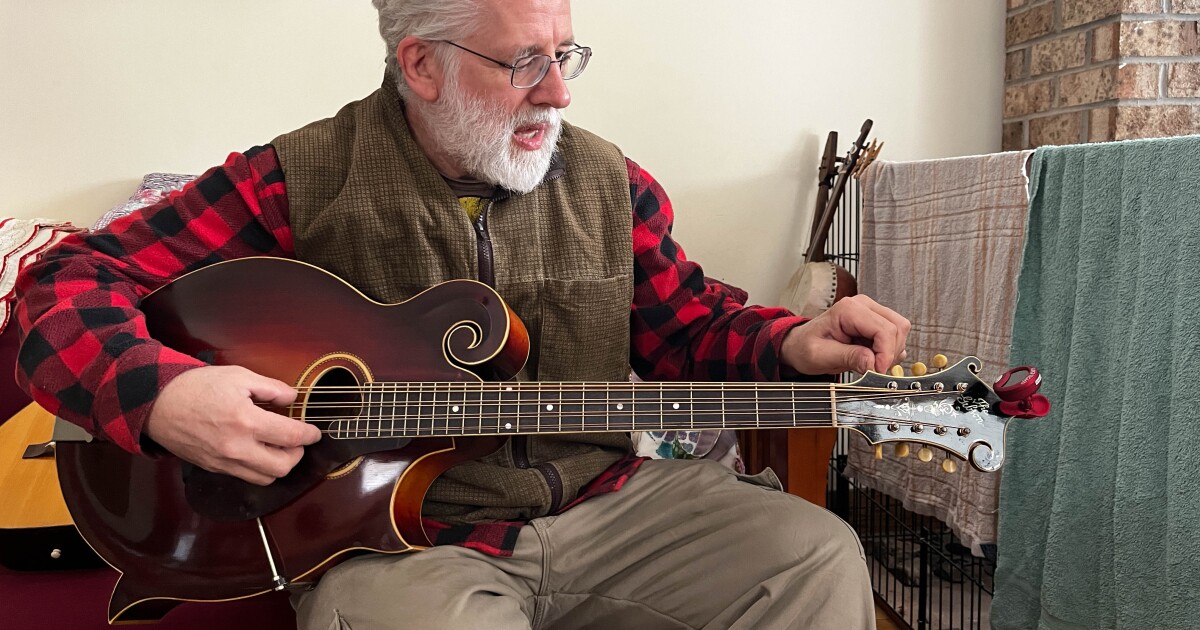 Walk through the front door of Bob Smakula’s studio and — it’s a lot to take in.

But eventually you see past the clutter and begin to notice all the musical instruments, in various states of repair.

There’s a ukulele on Smakula’s workbench. It’s a 1920s Martin; a beautiful instrument and a real collector’s item, but it has problems.

“For some reason Martin used mahogany for the tuning pegs, so they’re tough. Very tough,” he said.

These mechanics are held in place by friction, like those of a violin. This friction caused one of those brittle mahogany posts to break.

“I will replace them with a comparable ebony peg. And it will work better for him. He’s going to be able to tune things up a bit better,” Smakula said.

This is Smakula’s style. He could have slapped a set of modern metal gear tuners on that uke. It would have remained perfectly tuned. But that wouldn’t be fair for a 100-year-old instrument like this.

Smakula tries to make repairs that fix an instrument’s problems while staying true to its story.

“I definitely honed my skills to try to be invisible,” he said. “I don’t want anyone to know that I’ve ever been there except to say ‘Hey, that’s playing better than usual’ or ‘That sounds better than usual’.”

Smakula has been honing her powers of invisibility for a long time. He hails from Cleveland, Ohio, where his parents were involved in the folk music scene of the 1960s and 1970s.

At that time, new acoustic instruments were overbuilt and heavy. Folk musicians tended to seek out older instruments, but these often needed repair. So Smakula’s father, Peter, an engineer by trade, started fixing them.

Smakula was also interested in the inner workings of musical instruments. He learned to play the dulcimer on his mother’s lap and wanted one of his own. He didn’t have the money, so he sent for a build-your-own dulcimer kit.

“My parents’ friends saw the instrument and said, ‘Hey, you made it. Could you make me one? The next thing I knew was that I I was 14 and doing business making dulcimers for people,” he said.

Instrument repair was a difficult trade to learn in those days.

“We were definitely inventing the wheel,” he said. “The information age of instrument work simply did not exist. There were a few books out there, so I took whatever I could from the printed sources. But it’s not like now, where you can find everything you want to know via the Internet.

Smakula learned much of what he knows from the instruments that appeared on his operating table.

“Maybe a part needed to be replaced. We would investigate that and put something similar in place. Every manufacturer has their own little quirks or their own little design style,” he said.

His work developed such a reputation that Smakula decided to leave Cleveland – and the business he had started with his father. He followed his new wife Mary, who worked for the U.S. Forest Service in Elkins, and moved his operations to West Virginia.

“I decided that I could do my job anywhere in the world. It didn’t have to be in Cleveland,” he said. “Anywhere a UPS truck can come, I can fix an instrument and ship it back to the owner.”

He was right. In addition to his repair work, Smakula also taught instrument repair classes at the nearby Augusta Heritage Center. That’s how he found his apprentices Nate Druckenmiller and Andy Fitzgibbon.

Now customers from all over the country ship their banjos, mandolins, fiddles and guitars to this little store in the woods so Smakula and his team can get them singing again.

“[It was] made by a talented cabinet maker who, maybe banjos weren’t his main thing. But it’s really interesting,” Smakula said.

On a recent Monday morning, the instrument was resting on Fitzgibbon’s workbench. He has worked for Smakula for over 20 years and is the go-to banjo in the store.

“You see a lot of unique, one-of-a-kind homes like this. [They] vary in quality from really raw to really nice. And this one is really nice,” Fitzgibbon said. “It’s good to get them running again.”

But as enjoyable as it is, there are some things about this old banjo that just don’t live up to modern standards.

Builders today know that frets must be placed with precision, down to hundredths of an inch, for an instrument to play in tune. The frets on this 1887 banjo weren’t placed as precisely.

“At this point you have to balance the playability with the historical aspect,” Fitzgibbon said.

Since this instrument is more of a collector’s item, Fitzgibbon decides to keep the wonky fret work. But the balance could tip the other way if the instrument was to be played on stage or if the original construction compromised the structural integrity of the banjo.

In these cases, Fitzgibbon would apply a bit more modern craftsmanship. That’s what happened with Smakula’s own 1903 Fairbanks banjo.

It’s a family heirloom. His uncle found him in a bar in Newton Center, Massachusetts.

“He walks in one day and sees this banjo in the corner,” Smakula said. “He goes ‘Hey Tom, what’s with the banjo?’ And Tom is like, ‘Hey, somebody used it to pay a bar bill. You want it? You can have it.'”

He had a lot of sentimental value, but he wasn’t a great player.

“All the time I’ve had it, I always thought there was something missing. There’s something that needs to be done to make it the best banjo for me,” he said.

The fingerboard was blackened hardwood. It’s a technique where woodworkers mimic the look of ebony by creating a chemical reaction with the wood’s natural acids.

“The acidic matrices they used 120 years ago slowly degrade the cellular structure of wood,” Smakula said. “Without it being a good solid piece of wood, it would bend very slightly and make it harder to play.”

After years of working on instruments like this, Smakula and Fitzgibbon decided to rip out the old fingerboard and replace it with real ebony. They replaced the dowel head wood with a special type of poplar that matches the color of the old blackened wood but is more stable.

“And that banjo went from my favorite family heirloom to my favorite banjo to play,” Smakula said.

Smakula had been playing this banjo for almost 40 years before doing this repair. Why the delay? Well, the instrument really belonged to his father. It didn’t come into Smakula’s possession until after Peter’s death in 2008. But it worked perfectly. By the time it was truly his, Smakula had the years of experience to know exactly how to fix it.

Smakula doesn’t make its customers wait that long for their repairs. Some only take a few hours. A severe case can take six months. All you have to do is find a spot on their endless waiting list.

That’s why, as I was saying goodbye, Smakula made a request.

“When you broadcast this, I want to make sure you don’t leak my exact location,” he said. “Say ‘North of Elkins.'”

I said I noticed he only had a PO box on his website. Was he afraid someone would break in and run away with someone’s vintage guitar? No.

It turns out that Smakula is worried about something even more valuable.

It turns out he has more than one reason to be invisible.

This story is part of Appalachian Folkways Report Project, made possible in part through support from Margaret A. Cargill Philanthropies at the West Virginia Public Broadcasting Foundation. To subscribe to Inside Appalachia to hear more stories about Appalachian folk life, arts and culture.