A rendering of the Music Garden in Highfield Park

A new immersive sensory experience is coming to one of the Great Parks of Hamilton county parks.

Glenwood Gardens in Woodlawn will soon be home to an interactive music-themed garden, thanks in part to a $150,000 grant from the Ohio Department of Natural Resources NatureWorks. (The total cost of the project is estimated at $300,000.)

Called “Music Garden at Highfield Discovery Center”, it will include large instruments for people to play, as well as a stage for children to let their creativity run wild.

“The Music Garden at Highfield Discovery Garden will allow children and users of all ages to understand the connections between nature and music while creating their own performances encouraged by the nature around them,” says Todd Palmeter, CEO of Great Parks , in a press release. 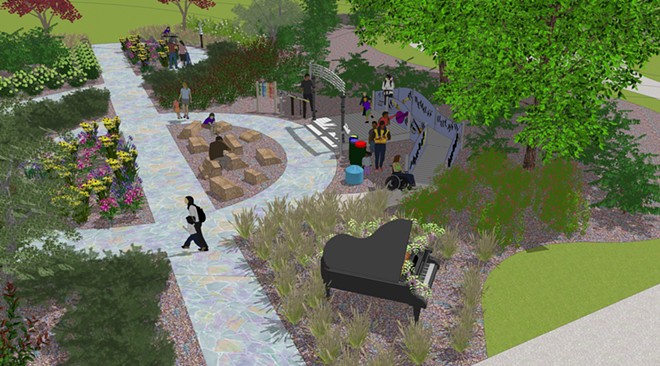 The park will include a path in the shape of a treble clef as well as instruments available to the public.

The garden will feature an accessible path shaped like a treble clef, and guests are encouraged to interact with instruments along the walkway. Great Parks says there will be five music stations, including a “collection of high-quality outdoor percussion musical instruments, such as double-sided chimes and a tung drum”.

Plant life was also selected to reinforce the theme. Great Parks does not specify what will grow there, except to say that greenery will be selected for inclusion based on “plant names, the sound they make, or visual appearances that may evoke musical inspiration.”

Construction on the Music Garden responds to public demand to see more
playful educational spaces. Specifically, the “Comprehensive Great Parks Master Plan” calls for “integrating nature, programming and facilities to provide unique offerings in each park that instill lasting memories in all users,” according to the release.

The Greater Cincinnati community will be invited to use the space informally and for organized programs, and Great Parks is looking to partner with Cincinnati schools that want to use it for their program. Great Parks plans to run programs that create sensory experiences for all ages and abilities, including the hearing and visually impaired, according to the press release.

Great Parks expects the project to be completed by the end of 2022.

In addition to the NatureWorks grant from the Ohio Department of Natural Resources, the project is also funded by the Dorothy B. Francis Charitable Foundation, the Highfield Foundation, and the Robert Gould Foundation.

Send CityBeat a news or story tip or submit a calendar event.

Haddington School of Music goes up for sale after a decade