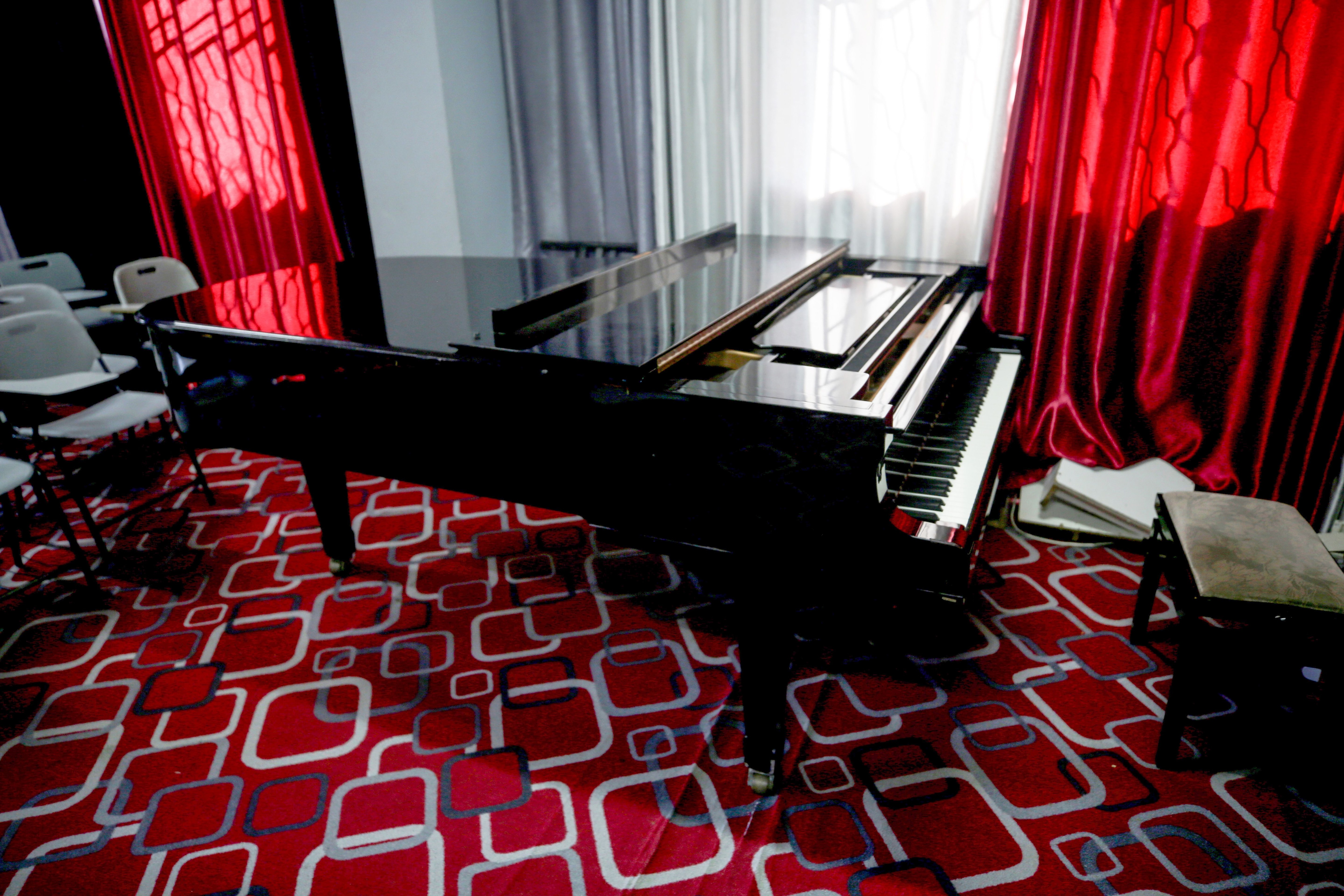 His hands sliding over the white keys, Anas Alnajar sits in an empty room and plays an instrument with a remarkable history: the only grand piano in Gaza.

“I’m so lucky to have the chance to play it. Playing the piano makes me feel comfortable and relaxed, ”says Alnajar The National at the Edward Said National Conservatory of Music in Gaza.

Wearing a white t-shirt and a disposable face mask, the teacher, 38, sits on a piano stool in front of rows of plastic chairs. The sun seeps into the room through the cracks between the heavy red and gray curtains.

“We are very proud to have the piano in the institute,” says Alnajar of the black Yamaha instrument which has scratches on its body.

The grand piano arrived in Gaza in 1998, as a gift from Japan, before the Second Intifada in the early 2000s and the four subsequent conflicts with Israel.

In recent years, it has faced a precarious future, having been rendered unplayable by a missile strike during the 2014 conflict.

MusicFund, a Brussels charity, intervened to restore the piano before it was transported to the conservatory in 2018.

Opening the instrument reveals rows of strings, above an intricate logo soundboard, appearing in excellent condition.

For us, having the grand piano at the institute is like having a treasure; it has a special sound

Manal Awwad, director of the Edward Said National Conservatory of Music in Gaza

Manal Awwad, head of the Gaza section of the conservatory, explains that the piano is kept permanently in a small room where the performances take place.

“The instrument is very delicate, so we don’t move it from its location,” she explains. “For us, having the grand piano at the institute is like having a treasure; it has a special sound.

But the instrument may never have reached the conservatory, housed in a building shared with paramedics whose ambulances are lined up outside.

The grand piano was originally performed in a theater in the Al Nawras complex in northern Gaza, which closed in 2007. It gathered dust until the strike, seven years later, put on hold. evidence its fate.

The property was claimed by Saed Herzallah, a businessman who bought the complex and its contents in 2011. Gaza’s culture ministry disputed this as the instrument was originally donated by Japan, sparking negotiations which ultimately led Herzallah to give the piano to the officials.

Atef Asquol, director general of arts and heritage at the ministry, blamed “neglect, greed and bureaucratic reasons” for the time wasted while the piano was in storage.

“I feel like I’m lucky enough to be part of moving the piano out of the basement,” he says. “And now it’s in the right place.”

A committee was set up to decide the fate of the piano. He chose the conservatory from among seven possible musical organizations to host the instrument, explains Asquol, under a contract that is renewed each year.

“This precious and highly regarded coin is meant to be invested in the right way,” he says.

The instrument was further threatened during the 11-day conflict in May, when Israel launched airstrikes on Gaza while Palestinian militants fired rockets into Israeli territory.

Awwad says she was worried about the instruments in the conservatory during the deadly conflict, but Gaza lacks bomb shelters for civilians, let alone the artifacts.

“If we cannot save ourselves, how can we save the instruments? The first thing we do after any round of fighting is over is to come and check the instruments. “

The conservatory emerged unscathed from the last conflict, allowing students to resume their lessons after the ceasefire.

With a Yamaha grand piano costing over $ 11,000, replacing such an instrument would likely be impossible for the music school.

The average income in Gaza was less than $ 22 a day last year, for the thousands of daily bets that are paid only for the time they work, according to the Palestinian Central Bureau of Statistics.

Some music students have upright pianos or electronic keyboards at home, which are more affordable, but they cannot compare to playing on a grand piano.

“I like coming here to play the grand piano,” says student Zaina Al Agha, 15. “This piano gives me a different feeling.