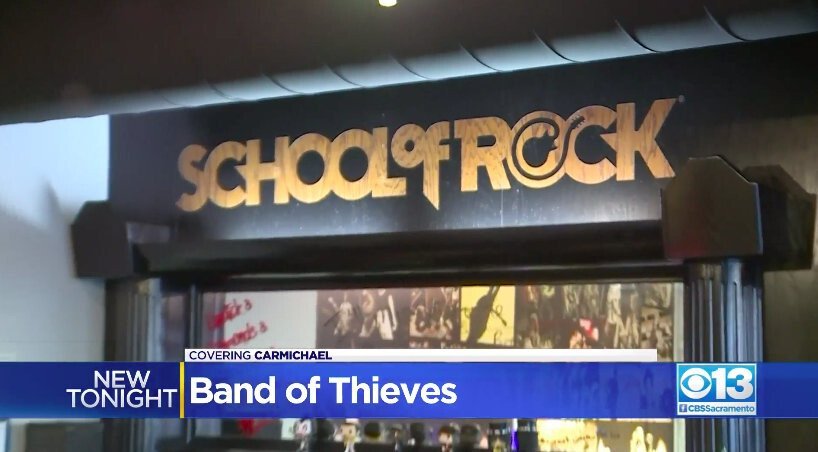 Students and staff at the Carmichael School of Rock say they hope the scales of justice will put this gang of thieves behind bars.

The school offers individual and group music lessons – from singing Harry Styles hits to drumming on a four-four beat. But the thieves targeted the Fair Oaks Boulevard campus in the early hours of the morning, stealing away with the kids’ tools of the trade – five acoustic, electric and bass guitars.

“It’s a shame because the kids use them every day they’re here for their lessons or the instructors use them.” said Jason Kline, owner of School of Rock.

“I’m a little sad that some people broke in and stole things,” student Liam Cobleigh said.

Surveillance video shows the suspect’s vehicle coming to a stop in the rear parking lot.

“There’s two guys in a car, one guy gets out with a crowbar and he cracks the backdoor open and gets in,” Kline said.

And it’s not the first time the school has been hit – a similar burglary happened last December.

“Honestly, really upset. This place is so cool to teach young people how to play,” said Enos.

Some children are now playing on borrowed instruments as they practice for upcoming recitals and public performances.

“We want our children to be able to learn the instruments and if they have nothing to practice on and nothing to play on, they lose the opportunity to learn,” said Amy Cobleigh, a mother.

But these musicians say this crime won’t stop the music.

The suspect’s vehicle is described as a silver Toyota sedan with damage to the driver’s front end and lacks a license plate.

Note: This content is subject to a strict local market embargo. If you share the same market as the contributor of this article, you cannot use it on any platform.

5 tools to inspire creativity in children