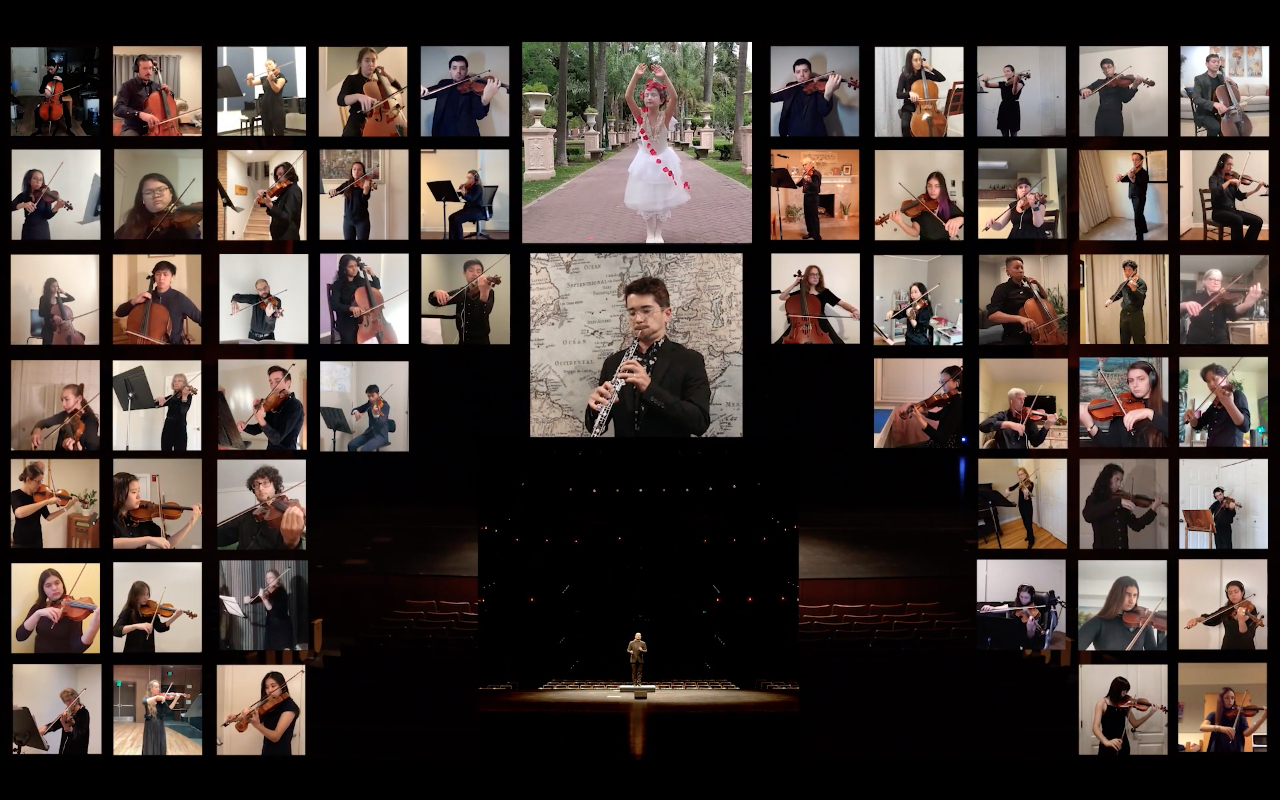 Discovering the forgotten instruments of the orchestra

Although orchestras are made up of musicians playing a wide variety of instruments, the violin and cello seem to shine the most. But beyond these two, others also play an important role in the band’s layered sound.

Michael Schwagerus, professor of double bass in the music department at UC Davis, explained why the instrument has so many different names.

“It’s a very diverse instrument, it comes in so many genres; [therefore] it has all these confusing and different names,” Schwagerus said. “[Bass is] in bluegrass, jazz, wind band – which is European music and African American music mixed together in Louisiana in the early 1900s – string orchestra, concert band, and pop music.

In addition to playing a lower register of cello parts, the double bass has unique characteristics of its own.

“The bass has such a wide range of interesting sounds that it can create harmonics, double stops, and percussion,” Schwagerus said.

Harmonics are specific places on the strings that produce a higher, more delicate sound. Often the notes are an octave higher than the open string notes (G, D, A, and E), but they can also be the fifth of the open string note or just any note for higher position harmonics.

Despite the bass’ ability to project through harmonics, the instrument’s overall deep sound can prevent it from standing out in the orchestra, according to Schwagerus.

“In my opinion, it’s because of the way the harmony is layered and how the sound projects through the layers of harmony,” Schwagerus said. “Because it doubles and is in such a low octave, it’s hard for the instrument to project and present.”

Beyond projection, Schwagerus explained other reasons why the double bass is more unpopular than the violin and cello.

“Well, all of our orchestral solos usually keep the bass, change the strings, and use solo tuning, which kicks our tone up a notch and helps the instrument project itself,” Schwagerus said. “That’s why all the repertoire has to be in the very high thumb position, so the melody has to come at the top of the harmony to be heard well and work well. For this reason, I believe our repertoire solo is a bit thin compared to the cello, [which] can naturally project quite well. The relationships between string size and body size for cello and violin are more resonant.

Additionally, the massive size of the double bass is often seen as unfavorable to the smaller, more manageable violin and cello.

“It’s difficult for a composer to help the instrument project because of its impractical size,” Schwagerus said. “[Moreover], families do not want to deal with the huge instrument which is very expensive. It’s easy to break when you have doors [and] things, and you need a big car.

However, despite these challenges, the double bass is a diverse instrument that can be played in different genres and is essential to many works of an orchestra. Schwagerus has played double bass in a triple concerto, a Mahler piece, a contemporary version of the national anthem and more.

Another consistently overlooked instrument is the bassoon – the largest wind instrument in the orchestra. Dr. David A. Wells, applied faculty member in the music department for bassoon, explained how it works.

“The bassoon is a wind instrument, [a section] we can divide into flute and reed subfamilies,” Wells said. “[The bassoon] uses a double reed, [where] two reeds [are] attached to each other which then vibrate.

The double-reed aspect of the bassoon contributes to its unique history. According to Wells, the instrument is “quite old…it dates back several thousand years.”

Besides the reed, the complex functions of the bassoon also set it apart from other wind instruments. It is more physically demanding than some other instruments, as it requires the use of all 10 fingers.

“The bassoon [is] more complicated [and] expensive to build and maintain,” Wells said. “Double reeds are more faithful and require more care and attention than single reeds.”

The bassoon lacks history compared to other instruments, which makes it harder to stand out.

“The clarinet, for example, is found everywhere; [they] were a regular member of what were otherwise called marching bands in the 19th century,” Wells said. “And that goes for some of the other woods as well.”

However, the bassoon has a diverse set of characteristics, as well as a signature sound, which gives it purpose within an ensemble.

“Usually the lead bassoonist plays more melodic and harmonic roles, adding the bassoon’s unique tone color to woodwind chords and things like that,” Wells said. “So we really have a lot of roles within the orchestra.”

The classic sound of the French horn is another often overlooked player. One of the main brass instruments in the orchestra, it can be identified by its subtle but fragmented tonality, which is usually used to sustain chords in other melodies.

Pete Nowlen, director of wind bands and horn professor at UC Davis, described the primary role of the French horn in an orchestra.

“[The horn is] a kind of moderator between the brass and the woodwinds, because the horn can be a very mellow, soft instrument and a very lyrical instrument; therefore, it can work very well as a soloist or a woodwind instrument or with the woodwinds, but can also be very, very powerful and color filling in the brass,” Nowlen said.

The French horn also has a remarkable orchestral formation.

” [In the 1700s] he came for the purpose of playing purely for hunting scenes in operas, because the horn was the instrument of the hunt,” Wells said. “And so […] when they released a hunting theme, they brought in the horn players to play the hunting calls.

Wells said that as a wind instrument, the horn works very differently from the strings in the ensemble.

“Playing a wind instrument is a lot like singing,” Wells said. “We actually have the sensation of sound in our body and [we feel the] impact of sound.

Additionally, horns offer a plethora of different roles in the orchestra as well as in non-orchestral ensembles, playing a part in wind quintets, brass quintets, brass choirs, wind octets and large ensembles to wind.

The popularity and need for the French horn has also increased with technical innovations.

“The big change for the horn that made it work and be able to accommodate more users was when the valve was invented in the 1820s and then over about 50 or 60 years it caught on and the horn went from being a very diatonic instrument to being a chromatic instrument,” Wells said. “So by the time of Wagner and Strauss, most of the possibilities of the horn existed.”

Finally, there’s the viola, informally known as a middle ground between the cello and the violin – it takes on a violin shape and is played like a violin, but has the same strings as the cello. Often the viola accompanies the melody alone or with the second violins, cellos and basses.

Ellen Ruth Rose, professor of viola and chamber music at UC Davis and UC Berkeley, violist of the Empyrean Ensemble and member of the new UC Davis music ensemble, explained the primary role of the viola.

“In the orchestra, the viola adds color, texture, and the inner workings of harmonies,” Rose said. “It kind of fills in below the melody to give it color and also above the bass to give it context.”

But Rose said that beyond that, the most poignant part of the viola is its imitation of human sound.

“[The viola] has a unique sound because its range is very much related to the range of many human voices like tenors, sopranos and even baritones,” Rose said.

Although somewhat similar in tone to the violin, the viola does not project as much due to its lower resonance – which may be just what gives the instrument its unique qualities.

“He has a more human voice, a more vulnerable voice,” Rose said. “It’s not acoustic, it’s more personally expressive. And that plays a lot in the new music of our time.

Rose also mentioned that violas and many other accompanying instruments “internalize” melodies, requiring considerable multitasking and concentration. This practice requires violists to listen to the music from the “inside out” or hear the piece starting from the middle sounds and moving outward to the melody and baseline.

“I think the type of person who gravitates around the viola is someone who, regardless of their technical skills, would rather be part of the music from within than some sort of soloist or melody on top of it. “, said Rose.

Needless to say, the orchestra involves a diverse range of instruments and each plays a crucial role in producing beautiful music, whether popular or unpopular.