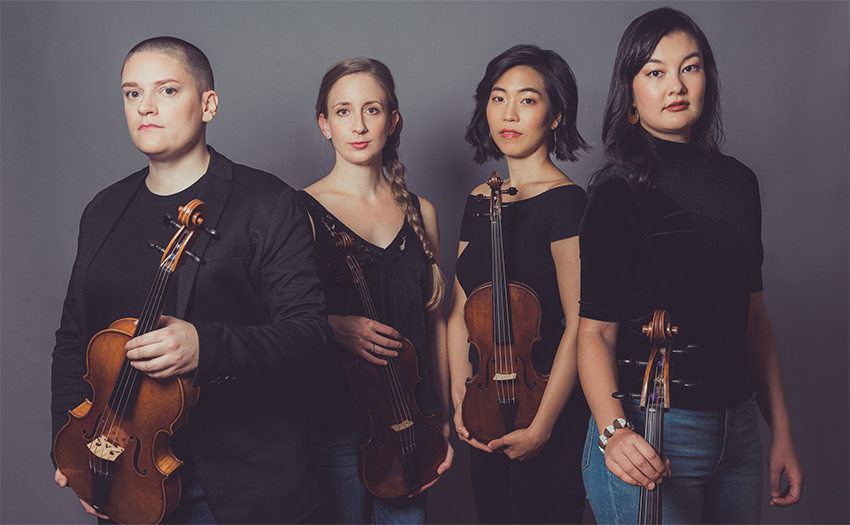 The Cramer Quartet will perform at Music Mountain in Falls Village, Connecticut on August 14. Photo by Lauren Desberg.

Falls Village, Connecticut— Everyone knows that there is nothing new under the sun. But the Cramer Quartet really puts that hypothesis to the test, unless you can name just one other string quartet that uses historical instruments to perform newly commissioned works inspired by 18th-century music. So even when they play standard repertoire, they sound anything but standard. They are more like the music that 18th century audiences heard in the salons of Vienna.

Cramer’s musicians, violinists Jessica Park and Chiara Fasani Stauffer, violist Keats Dieffenbach and cellist Shirley Hunt, will arrive early at Music Mountain on Sunday, August 14 to discuss their work ahead of their 3 p.m. performance. They will be joined by American composer Alexandra du Bois, whose String Quartet #6 will receive its world premiere at the 3 p.m. performance.

The Cramer must be the most ambitious string quartet on Earth. This ensemble intends to do nothing less than “rebalance” the canon of the string quartet. And they start very well. As people of color, women, non-binary/transmask, and LGBTQ+, their mission is to advance cultural equity in classical music while championing historically informed performance practices.

Joseph Haydn composed 68 string quartets, and the Cramer Quartet loves them all. They love Haydn’s music so much that they have undertaken “Haydn: Dialogues”, a multi-year project combining Haydn’s 68 quartets with 16 new works commissioned from composers with marginalized identities. Each composer creates a historical instrument response to one of Haydn’s 16 opuses. These performances will take place over the next ten seasons, concluding in 2032, the 300th anniversary of Haydn’s birth. The group’s performance on August 14 inaugurates the series. Next season the quartet will premiere a new work by composer inti figgis-vizueta alongside the three Haydn Op. 71 string quartets.

Here is the schedule for Sunday:

The Los Angeles Times called Alexandra Du Bois “one of America’s most promising young composers.” And what the New York Times has written about her suggests she’s an ideal match for the Cramer Quartet: Today, to borrow a term from rock, it was pure emo. “Most importantly,” wrote the Huffington Post, “Alexandra du Bois writes music with beauty and heart.”

With a historically informed approach to performance rooted in the sonic world of gut strings, the Cramer Quartet brings classical, romantic and contemporary repertoire a palate of warm, transparent sonics otherwise relegated to the performance of early music.