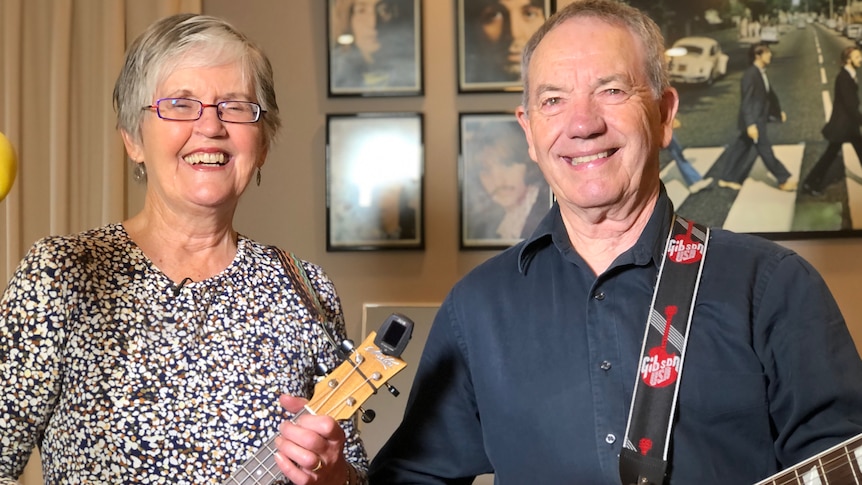 At 76 and 78 years old, Canberra’s grandparents, Maria and Chris Adams, are proof that you’re never too old to stick with a man.

“We were laughing while filling out the application,” Ms. Adams said.

“But then we got accepted and we were like, ‘Oh my god, grandpa and grandma are going to rock school!'”

Mr Adams said he would have loved being in a band as a child, but neither he nor his wife’s parents could ever afford to take music lessons.

Now among themselves, they play the ukulele, the guitar and sing.

“We love to play the songs that we remember because it gives us memories,” Mr. Adams said.

“It’s something that we can share with each other and with our eight grandchildren,” Ms. Adams said.

The school of rock is led by Micha Forman through the ANU School of Music.

The program is free and open to anyone aged 18 and over.

“We will have very young participants coming out of high school, up to people in their 70s to 80s,” Ms. Forman said.

Students learn to play in groups and develop their own instrumental skills.

At the end of the four or 10 week program, the class gives a concert at the Smiths Alternative in Canberra.

“We have a lot of attendees who did music in high school or did music as a child,” Ms. Forman said.

“They say ‘my singing teacher told me I was no good’, or ‘I was never good enough to play the piano’, but they always loved music.

Sarah Walker, who has attended Community Rock School three times, is a drummer, but recently had the courage to sing.

“I had never sung in public before. I love being a student again,” she said.

She said she rarely takes risks as an adult.

“I think as an adult I’m less willing or less comfortable to make mistakes. But you learn, so you’re going to make mistakes, so it’s good to do it in a safe environment.” , she said.

“Trying something new with other people is really special and really hard to find.”

A group united by a common love of music

Ms Walker said returning to school with people of different ages and backgrounds was a rich experience.

“We’re all in the same boat,” Adams said.

This year had been a challenge, with the program transitioning online during the Canberra lockdown.

But the show must go on, and in January the most recent graduates will perform together in real life.

“There is something special about going, whatever your experience, whatever your ability now, we’re all different, we all love different music, but right now we’re playing this song, and it sounds great. and it feels good, ”Ms. Forman said.

David Surette, teacher at the community music school, “performed as he lived” –…