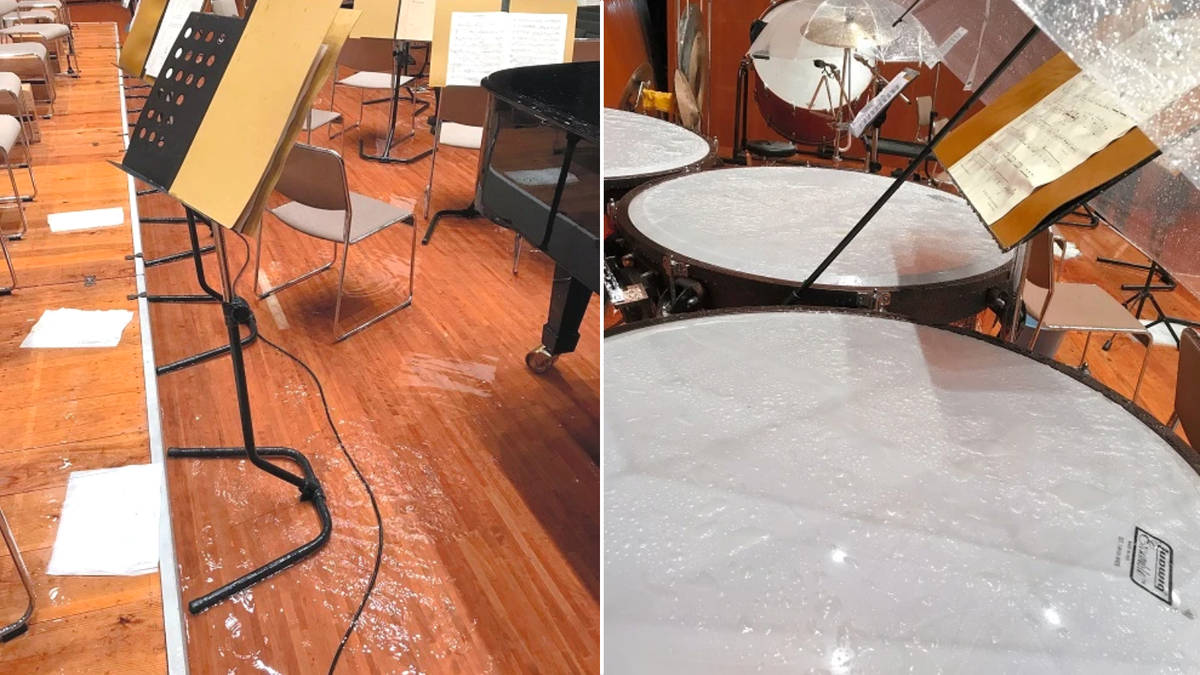 A sprinkler malfunction caused hundreds of millions of yen in water damage to the musical instruments of a Japanese orchestra.

A Japanese orchestra has spoken out after an incident in September earlier this year led to its musical instruments sustaining water damage worth hundreds of millions of yen.

The Sinfonietta Shizuoka was scheduled to perform at the Susono City Cultural Center on September 24 and practiced in the concert hall before the start of their performance.

At 1 p.m., while the musicians were rehearsing, the hall’s sprinkler system reportedly had a problem, causing the building’s main hall sprinklers to go off.

The result was a tirade of water dripping from the ceiling that partially flooded the concert hall and damaged many of the orchestra’s musical instruments.

The orchestra held a press conference three weeks later, on October 13, to share its anger over the incident. According to the orchestra, more than a hundred instruments were damaged by the waterfall.

Read more: A party in a German concert hall has musical instruments badly damaged by a fire extinguisher

Among the damaged instruments was a Steinway piano believed to have been purchased by the city’s cultural center for 13 million yen (about £77,000).

During the press conference, the orchestra’s bassist, Taku Tsuchida, shared that the orchestra members desperately tried to save the instruments on stage.

Tsuchida said his fellow musicians tried to keep the instruments dry by rushing them off stage or using towels and the clothes they were wearing to remove what water they could and stop any further absorption.

Five orchestra members were also injured running and falling due to the hazardous water environment.

The orchestra would estimate the total damage at hundreds of millions of yen, but cannot be sure of a figure as many instruments affected are the personal property of the musicians.

At the press conference, the orchestra’s artistic director, Tomoya Nakahara, told reporters, “It is impossible to find substitutes for many of our musical instruments, even if we try to search.

“It is a calamity that so many instruments have been tempered so badly. We are praying that they can be repaired so they can continue to be used, but at this time it is unclear whether this is even possible.

Read more: How do extreme temperatures affect our musical instruments?

A city official reported that no mechanical issues were found with the sprinkler system, which was reviewed following the incident.

The police were contacted as it was suspected the system may have been tampered with, but the musicians doubt this theory given that the panel to control the sprinklers was backstage near where they rehearsed. The orchestra’s artistic director later suggested that the musicians would have seen if someone had tampered with the panel.

Two weeks after the October 27 press conference, the city government of Susono announced that it would set up an expert committee by the end of November to investigate the sprinkler incident. Japanese newspaper, The Asahi Shimbun also reported that city officials said the water devastated the cultural centre, totaling around 159 million yen (about £943,000) in damage.

The city’s mayor, Harukaze Murata, told reporters that compensation for the orchestra would only be considered after the results of the committee.