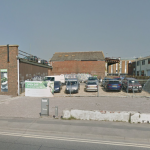 A music school is looking to expand further with a new base at a sports hall in Portslade.

BIMM (British and Irish Institute of Modern Music) has applied for planning permission to be able to teach students on the ground floor of the Circle.

The three-storey building, between North Street, Camden Street and Wellington Road, stands on the site of the former Flexer Sacks factory.

The building, owned by developer Farshad Ghiaci, 68, is currently used as a gym and arts center.

BIMM has submitted plans to Brighton and Hove City Council for a change of educational use – and bosses want to bring the three smaller dance studios together to create a larger space.

The college wants to turn a large storage area into smaller vocal studios and rehearsal rooms, but keep an existing auditorium.

BIMM said: “The educational institution is tertiary and operates similar to a university with students aged 18 and over.

“Students will reside in student accommodation elsewhere in the city.

“Students will not be allowed to bring vehicles to the site and will be encouraged to walk, cycle or use public transport.

“BIMM will operate a travel plan similar to the one they have in place for their other sites in the city.”

BIMM said the facilities would also be used by its partner college, the Institute for Contemporary Theatre.

The application can be viewed by searching for BH2021/04215 on the planning pages of the council website.