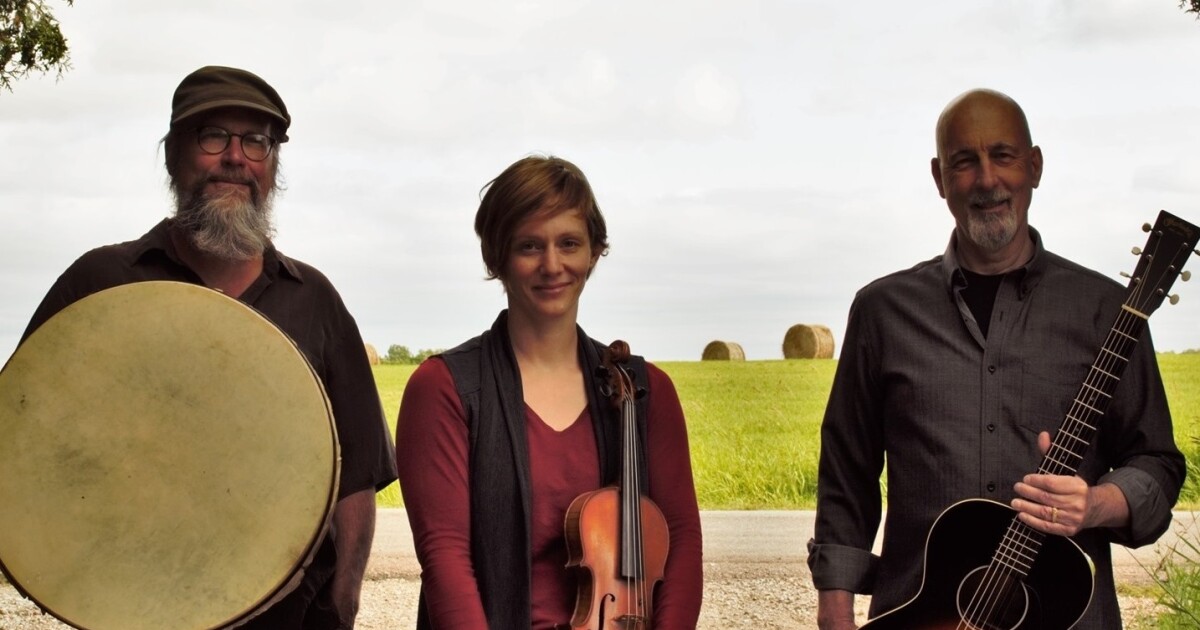 The musicians of the Boundarywater Trio, based in Petoskey, have been playing together since 2016.

The group first formed after violinist Stephanie Cope invited guitarist Bill Wilson to play solo in a series of concerts she was organizing at the time.

After the concert, Wilson told Cope that he was tired of playing alone and was looking for other people to make music with.

Cope volunteered and the two began performing as a duo. Gary Schils, the band’s “percussion wizard”, joined soon after.

Many of the instruments Schils plays are ones he found or created himself, such as a tractor valve he found at a tool and die store which he uses as a bell.

He discovered that the key he uses to tune his drum can also be used to play wind chimes.

“You get metal on metal, which gives it a more tart feel,” Schils explained.

The music of the Boundarywater Trio has deep roots in northern Michigan.

Many of their original tracks are related to the region.

For example, Bill Wilson was inspired to write “Maggie’s Blue Marble” after attending a Water is Life Festival event in Petoskey.

“Part of this ceremony was giving each person a blue marble to represent the earth,” Wilson explained. It is the “blue marble” of the title.

He was also working on a jig tune inspired by the music of Al Petteway. Petteway has a track called “Maggie’s Reel” and also records on the Maggie’s Music label.

The video (available below) includes guest appearances by Checkers the Corn Snake and what Cope called “an extremely photogenic turtle.”

And how did they find their name?

“It’s hard to come up with a name that’s both cool and not already taken,” violinist Cope said with a laugh.

They chose “boundarywater” because it reflects both the beauty of northern Michigan and the band’s playing style.

The three instruments are equal in the trio, as opposed to one always accompanying the other.

“We like to weave the melody on each other and share it,” Cope explained. “There are boundaries between our instruments, but it’s like waves on a shore.”

Almost all of the music the Boundarywater Trio performs is composed by a member of the band, although they occasionally play existing traditional tunes. They plan to branch out further into a “jam session” or collective composition process in the future.

This edition of Studio A was designed by Stefan Wiebe.