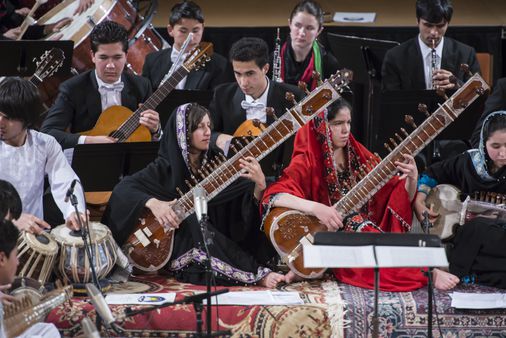 Now, as the Taliban consolidate their power in Afghanistan with breathtaking speed, the school’s founder, alumni and NEC aides fear the worst – a future where students’ budding potential is stifled by a regime known for her hostility to the arts and women’s rights.

“I’m scared,” school founder Dr Ahmad Sarmast said via Skype from Australia, where he is recovering from a medical procedure. “I am concerned about the future of the school as well as the safety and security of my students.”

For now, the school is closed, its students sheltering at home despite efforts by the Taliban to appear more moderate, urging women to return to work and pledging to respect women’s rights.

Afghans are right to be skeptical. When the Taliban ruled the country in the late 1990s, they did so with brutality: public executions were common, women were often confined to their homes, music was banned and instruments burned.

Thus, in 2010, when Sarmast founded ANIM, the self-proclaimed the country’s first and only music school, it quickly became an artistic haven for children who might otherwise miss out on opportunities in life. While the Taliban banned many girls from school, girls make up about a third of ANIM’s student body and more than half of its students come from poor families, according to the website of the ANIM. school.

The school educates more than 200 boys and girls, offering instruction from grade four on in traditional Afghan music and Western classical traditions, as well as math, physics and language classes. Its students have also undertaken almost 50 international tours, trips where they perform and collaborate with musicians in Europe, Asia and Australia, among others.

“It’s a really great place in terms of education, and it’s all underpinned by the music,” said Robin Ryczek, a former NEC student who has been on the ANIM faculty for eight years. For many students, “it was perhaps a big change from a life they had before, where they worked selling pens on the street or begging or shining shoes”.

Elham Fanous, a pianist who became the first ANIM graduate to attend an American university, said the school “was heaven for us”.

“People usually hate school, but we were like, we couldn’t sleep, we just want to go back to school and do all these activities together,” said Fanous, who recently earned a master’s degree from Manhattan School. of Music. “It completely changed my life.”

Perhaps equally important, he said, are the school’s international tours, including the 2013 trip, where ANIM students performed at the John F. Kennedy Center for the Performing Arts. in Washington, DC, and at Carnegie Hall in New York before arriving for three days. residency at the NEC. In addition to master classes and workshops, Fanous remembers performing a Sonata by Beethoven and a Nocturne by Chopin. But one of his favorite times was simply wandering the halls of the school, watching the conservatory students as they rehearsed in the practice rooms.

“I vividly remember how joyful it was to be part of this tour and to be in Boston,” said Fanous, whose father and sister are still in Kabul. “We just wish it was the community that we could bring back. This is what many students felt. We felt so blessed and blessed to be there.

Over the years, several NEC-affiliated musicians and teachers have traveled to Afghanistan to teach at the school, including Tanya Kalmanovitch, who was introduced to the school by Ryczek and organized the 2013 residency.

“I can’t stress enough that ANIM is a happy place,” said Kalmanovitch, a violist. “It hits you early on as you go through school – the sense of resilience, of possibility, of optimism, of transformation.”

That resilience is being tested after the Taliban seized power last weekend, seizing Kabul as US diplomats abandoned the embassy and Afghan President Ashraf Ghani fled the country.

“People are very scared,” said Ryczek, who returned to Cape Cod last month for the vaccine. She does not know when she will return to Afghanistan. “People are confused.”

Sarmast said he was surprised by the course of events, adding that the government had “handed over” power to the Taliban.

“It’s a betrayal,” he said. “The international community has abandoned Afghanistan and the Afghan people.”

He added that although the despotic Taliban regime once silenced the country’s women and artists, he hopes the country’s new rulers will keep their promise to be less repressive.

“I’m an optimistic person,” he said. “The very first try. . . is whether they will allow the only music school in Afghanistan to operate.