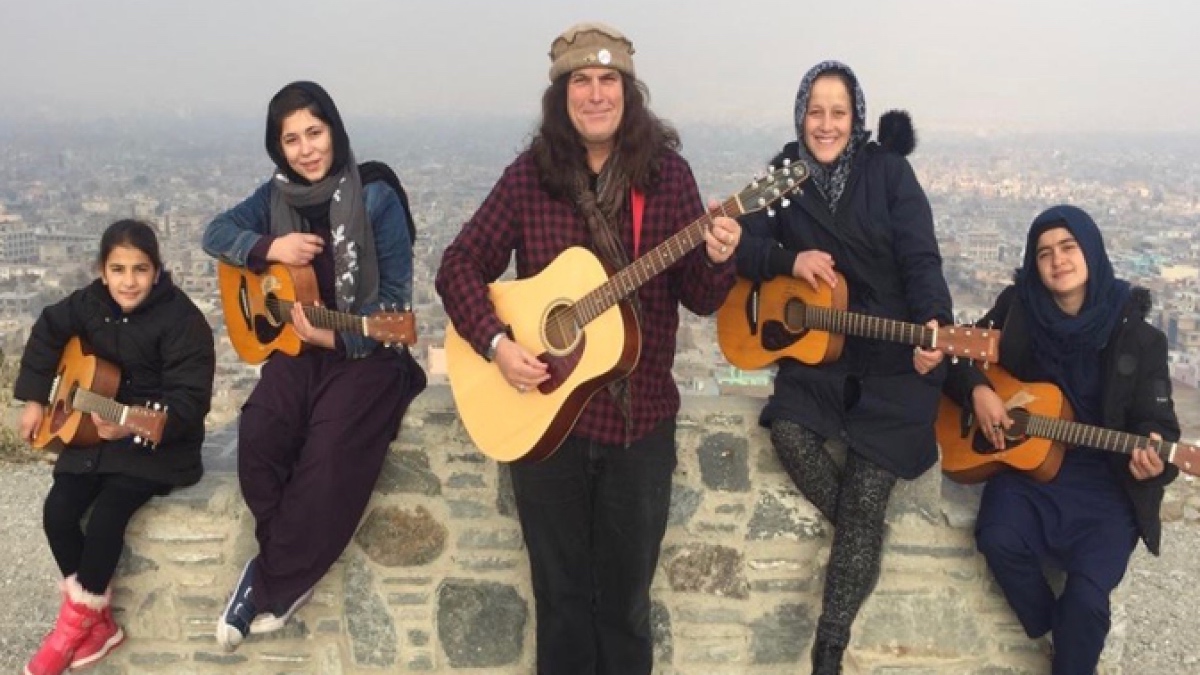 Afghanistan’s only girls’ music school is appealing for help to get its students safely out of the country after the Taliban takeover.

“Today our lives are in great danger as the success we achieved being part of the Afghan cultural scene has now marked us for persecution and even death by the Taliban,” shared The Miraculous Love Kids, directed by American guitarist and teacher Lanny Cordola. a heartbreaking statement.

“Now, with the rapid takeover of Kabul by the Taliban, we are literally in hiding, with our older students in particular danger. Our school is closed, and many people who were supposed to protect us are now looking to us as a bargaining chip to curry favor or even a bounty from the Taliban. As girls playing western music… we couldn’t be more at risk.

Launched in 2006 as a non-profit initiative with just three students, the school grew during the US occupation of Afghanistan to include nearly 200 female students, all of whom learned reading, math and other life skills that were previously not available to girls and women under the Sharia of the Taliban regime.

Over the years they have worked and recorded with a host of famous musicians including Tom Morello, Brian Wilson, Blake Shelton, Sammy Hagar, Chad Kroeger, Nick Cave and others.

Now Cordola and his students are looking for a way to get safely to Kabul’s Hamid Karzai International Airport, which was recently hit by a devastating terrorist attack that killed at least 95 people and injured 150 others, according to the BBCas civilians rushed to flee the country.

“We call on the international community, diplomats, politicians, media and NGOs working to evacuate civilians under threat, to find a way to get as many of us on planes safely leaving Afghanistan. security. Time is imperative as the airlift must end, which would leave us here hopeless,” the band continued. “We pray that the international community will not abandon us to a fate that will almost surely be death. “

Cordola has currently been evacuated to Islamabad, Pakistan. He asks anyone with military or security contacts who could help secure safe passage to the airport and seats on planes to contact him any time of the day or night by phone at +1-562- 209-3769 or email [email protected]

Update: August 30: Rage Against the Machine’s Tom Morello, who previously collaborated with The Miraculous Love Kids on their Girl with a Guitar program, wrote an open letter in hopes of raising awareness. He comes by Billboardand you can check it below.

“I am writing on behalf of some very special girls in Afghanistan who are in grave danger,” Morello wrote. “[Girl with a Guitar] welcomes street orphans and other girls who have suffered significant trauma and uses music as a tool for rehabilitation and a way to resolve their problems, their stories and their hopes. I had the honor of collaborating with these wonderful children. Since the Taliban takeover, their school has been destroyed and the girls are in hiding. They are at extreme risk as they are widely known to have played Western music and were educated by an American teacher. Anything you could do to help save their lives would be greatly appreciated.