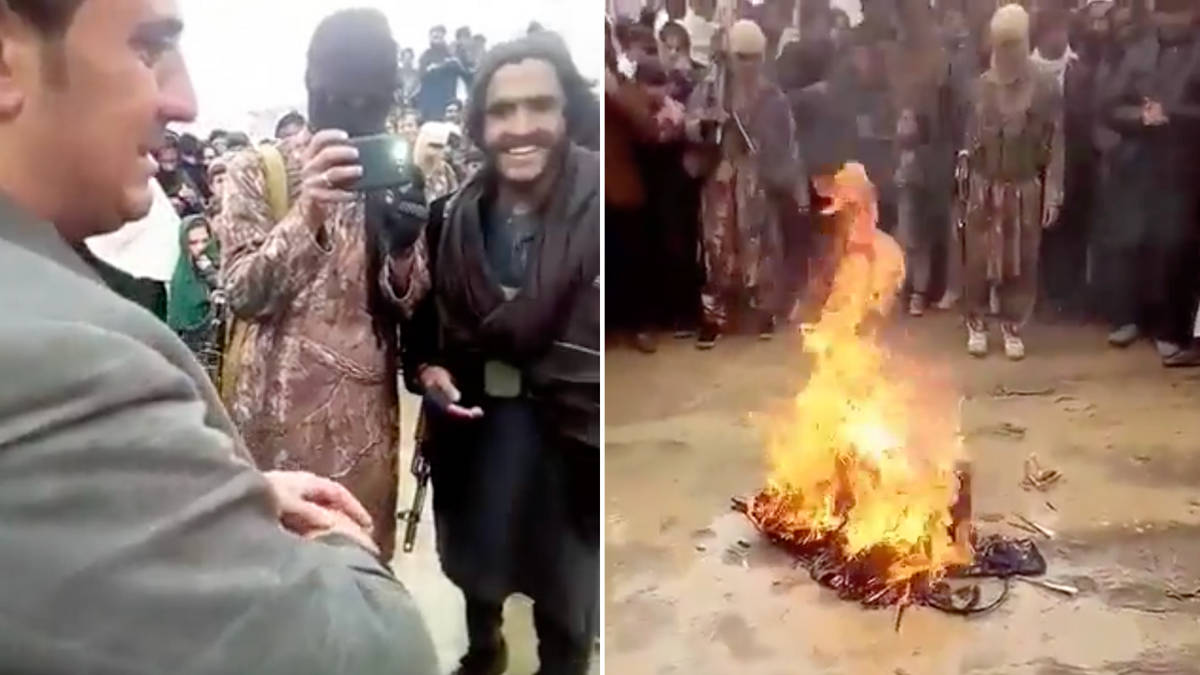 Afghanistan: A musician cries as the Taliban burn his musical instruments in front of him

Footage shows an Afghan musician made to watch his musical instruments being set on fire, as the Taliban wage a long-term war on music.

An undated video has gone viral on Twitter showing Taliban fighters burning the drums and harmonium of a local musician in Afghanistan’s Paktia province.

In the recording, posted by journalist Abdulhaq Omeri, the musician is in tears as he is forced to stare at his burning instruments.

Other Afghan journalists made observations from the images. The musician’s clothes are torn, suggesting he has been beaten, and his hair has been cut, a common public punishment by the Taliban as a warning “for a first time or relatively minor offence”.

The local musician is also made to say “I am a scum”, in front of the crowd of people gathered around the flaming instruments. Laughter can be heard from Taliban soldiers.

This is the latest video to appear showing the Taliban’s campaign against the Afghan music and arts community. Twenty years ago, during their last rule in Afghanistan, the Taliban banned all forms of music other than religious song.

Since the Taliban regained control just over five months ago in August 2021, they have reintroduced a ban on music in public places. Researchers believe it is a slow introduction to the complete ban on music, which led to musicians fleeing the country for their safety.

This isn’t the first example of footage showing musical destruction to emerge in recent times.

In late December, another clip went viral on social media, showing some of Afghanistan’s most famous instruments, a rubab, tabla and harmonium, being crushed with rocks by soldiers.

The local musicians, who owned the traditional instruments, were then made to promise never to sing or play music again.

There has been one known death of a musician since the Taliban took power last year. Well-known folk singer, Fawad Andarabi, was dragged from his home village before being shot dead by the Taliban in August 2021.

In response to the shooting, UN Special Rapporteur on Cultural Rights, Karima Bennoune, condemned the Taliban’s actions saying, “We call on governments to demand that the Taliban respect the human rights of artists.

“We reiterate our call on governments to find safe and efficient ways for artists and cultural workers in need to get out of Afghanistan.”

Some musicians have been able to flee to neighboring countries and beyond, such as students from Afghanistan’s only music school, the National Institute of Music of Afghanistan, who are starting to rebuild their home in Lisbon, Portugal.

The international music community has shown its support for all those displaced or caught up in the violence. An example of fundraising for those affected is taking place this Saturday, January 22 at the Barbican in London, where Songs of Hope: a benefit concert for Afghanistan aims to raise funds for selected charities working with people affected by the conflict.