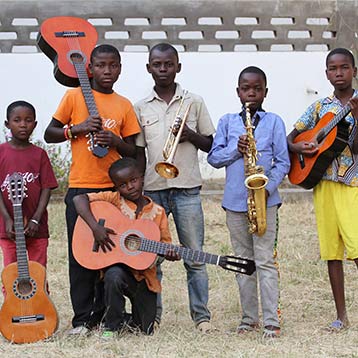 WARSAW, Poland – Polish Franciscan Capuchin missionaries have opened the first music school in the Central African Republic in hopes of preventing children from being conscripted into paramilitary groups.

Around 100 students study each afternoon with professional musicians from Poland and France at the African music school in the western town of Bouar.

Marcin Choinski, director of the Akeda Foundation in Krakow, Poland, which sponsors the school and works with the Capuchins, said students learn music theory and take lessons in guitar, saxophone, trumpet, keyboard and battery. Students of various denominations are enrolled. About 40% of the students are girls.

“Of course, we can’t help every child in this country with just one school, but we can show those who have only known war and poverty that better things are possible,” Choinski said. “Although we cannot offer full-time accommodation, our new kitchen now provides hot meals for our otherwise hungry students. Some say that alone will be the best Christmas present we can give.

Franciscan Father Benedykt Paczka, a musician and one of 14 Polish Capuchins working in the country, founded the school.

Choinski said on December 18 that Father Paczka realized that many local children were musically gifted, but had no opportunity to develop their talents. So in 2013 he started offering music lessons at his monastery after buying instruments in neighboring Cameroon.

“The war was raging and when more than 300 children showed up, he quickly saw it as an opportunity,” said Choinski, whose foundation helps victims of war and natural disasters.

An eight-year conflict between rival militias has displaced 1 million people and forced another 400,000 to flee the country. The Capuchins of Krakow run five missions in the country and purchased land for the school in 2015.

The construction of a school building continues in Bouar. Choinski said Father Paczka’s ties to local public school principals have helped ensure the site is secure from theft and intimidation by outside groups.

“The soldiers are deployed here under the auspices of the United Nations, so it’s relatively safe, and we haven’t faced any serious attacks,” Choinski said.

He said several students had shown extraordinary ability and he hoped to raise funds to send them to academies in Europe once the school site was completed.

The diocese of Bouar, led by Polish bishop Miroslaw Gucwa, had supported the school, but that money for construction, instruments, food and maintenance had to come from donations, he said.

“By releasing instruments rather than weapons, we hope to show children here and abroad that other life paths are possible,” Choinski said.

The chairman of the Krakow-based Capuchin Mission Foundation, Father Jerzy Steliga, said initiatives such as the school were “very necessary in local conditions” to help young people caught up in the civil war.

“Music is a key part of African culture, allowing children to discover their interests, but also to develop as people through a positive and creative attitude,” Fr Steliga said. “Perhaps this will indeed be the seed of something bigger and bigger, helping the world’s poorest to reveal their true talents and abilities.”

The Audition review – love and hate at music school

Review of Pazu Downloader for Disney+