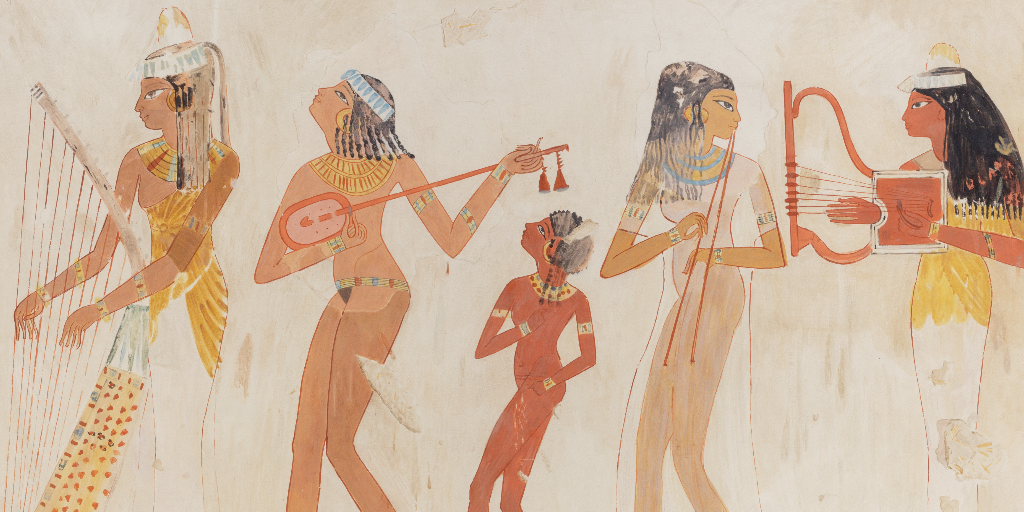 A Case of Melodies: Musical Instruments Unique to Egypt


A Case of Melodies: Musical Instruments Unique to Egypt

The history of Egypt is infinitely remarkable. Rich in culture and interspersed with magnificent arts, Egypt is an epicenter of influence and inspiration for the world at large. To this day, Egypt is home to some of the most ornate musical melodies in history.

Some of the instruments used in Egyptian music today date back to ancient Egypt, while others appeared in later centuries. Egyptologist Helen Strudwick notes that “music was everywhere in ancient Egypt – at civil or funeral banquets, religious processions, military parades, and even at field work.”

All quite familiar, these instruments were for the Egyptians – in times of great celebration and in times of mourning – a perfect companion.

The sistrum, or rattle, is a wooden and metal percussion instrument with a handle that branches out into a U-shaped frame. The instrument dates back to ancient Egypt and was used in religious rituals to honor various goddesses . The sistrum was sacred and expensive, usually high-ranking women, musicians or priestesses possessed it. Different drawings show deities, including Isis, holding a sistrum in their hands. The U-shape of the sistrum closely resembled the Egyptian symbol of life, the ankh. The instrument traveled from Egypt to Ethiopia; it is still used in church ceremonies there.

It is believed that the lute instrument was introduced to Egypt as a result of Hyksos influence. It is a stringed instrument with two or three leather strings on a long neck attached to a round body. The strings are plucked using a pick or fingers, like the modern guitar, and the strings vibrate above its hole, called the rose, creating a deep sound. There are short-necked lutes, but the long-necked ones were the most important. The lute was the domain of female musicians, but some frescoes – including the royal tomb of Ramses III – show male musicians playing the lute. The Egyptian oud used today is a type of the short-necked lute family.

Clappers, or castanets, were the first musical instruments used by musicians in ancient Egypt. Tap dancing provided cadence and rhythm and was used in many rituals and ceremonies. The clapping sound produced by the instrument was believed to represent the ancient Egyptian goddess of music Hathor. An example of the instrument was found in Tutankhamun’s tomb and is on display in the Egyptian Museum. The clappers were then hollowed out and made into a pear-shaped instrument of hardwood such as ebony or rosewood; they were held together with twine or cord. The instrumentalist laced the clappers in ivory and sculpted one end in the shape of a hand. A very close resemblance to vintage tap dancing are the loud claps that football fans take during games.

The Ney, an end-blown wooden wind instrument with seven finger holes for changing the melody by the blown air, is one of the oldest Egyptian flutes. The instrument has been used over the centuries to create dark melodies – the paintings on the walls of the Great Pyramids of Giza how Ney players. The modern Ney has not varied in structure and is now found in Islamic communities used in prayer and worship.

The harp, or benet, is one of the oldest musical instruments in ancient Egypt, dating back to 3000 BC. The Egyptian harp consisted of a long wooden neck with an arched sound box with strings attached to a diaphragm at one end and tied around the string arm or neck at the other, producing tunes by plucking the strings . Harps were often made from precious materials; a harp of ebony, gold and silver was made for King Ahmose. Until this day, the harp is still considered one of the most elegant musical instruments.

The cymbal, also a percussion instrument, is one of the most important instruments of ancient Egypt. Cymbals are round, flat plates of metal that come in pairs and vibrate when struck against each other. Cymbals, used to accompany drums and sistrums, were widely used in military and religious events. The instrument can produce thumping sounds when held horizontally and soft sounds when held vertically. Modern cymbals are often used as finger cymbals, primarily in performances by Egyptian belly dancers. Cymbals are also used in modern drum sets and can be classified into four categories; crash cymbals, ride cymbals, hi-hats and effect symbols.

The lyre instrument, used by the ancient Egyptians, was used as an accompaniment for poetry readings, ceremonies and banquets. Lyres are often confused with harps; however, there are key differences. Lyres are lighter, held by the musicians as they play and plucked with a plectrum. On the other hand, harps are heavy instruments that partially rest on the floor when playing and are plucked by hand. Asymmetrical lyres were played horizontally and symmetrical lyres were played vertically. Lyres are now called bowed harps and are commonly played in some countries like Ethiopia.

The trumpet is one of the oldest instruments played in ancient Egypt. Ancient trumpets were made of wood and had a long stem. They were often made of silver, bronze, gold and terracotta, obviously used in parades and military reasons. Although primarily men played the trumpet, women played the instrument at festivals and as offerings to various deities. Trumpets are now commonly used in classical and jazz ensembles.

Famous for its radiant, tinkling sounds, the Riq, or Tambourine, dates back to ancient Egypt. The small instrument consists of bronze or copper jingles that are held in place by metal pins. The riq was mainly used in ancient religious ceremonies by dancers, festivals and funerals. The modern riq is still obviously used in dynamic ensembles, especially in folk and classical music. Visual depictions of the Arab tambourine in art and photography suggest cultural exchanges of the tambourine throughout the history of Islamic civilization.

The Semsemeya instrument tells stories of history and culture. Adapted by musicians from Port Said, the instrument was originally found in Bedouin desert coastal communities across North Africa. The Semsemeya closely resembles a cross between a guitar and a harp, played by resting its sides on a and plucking its string with a hand or al Risha. The instrument is popular in Egyptian folk music, especially in towns along the Suez Canal.

Traditionally used in the Zar and fan at-tanboura ensembles, the mangour is a leather belt made of goat hooves and studded with cowries. The Zar, a spiritual ceremony, found its way to Egypt in the 19th century. The mangour is among the many traditional instruments used in the Zar ritual, where mainly men wear it around their waists and simultaneously strike their finger cymbals, or sagatto create a clicking sound when the hooves collide.

A Boba Fanatic’s Guide to Bubble Tea in Cairo