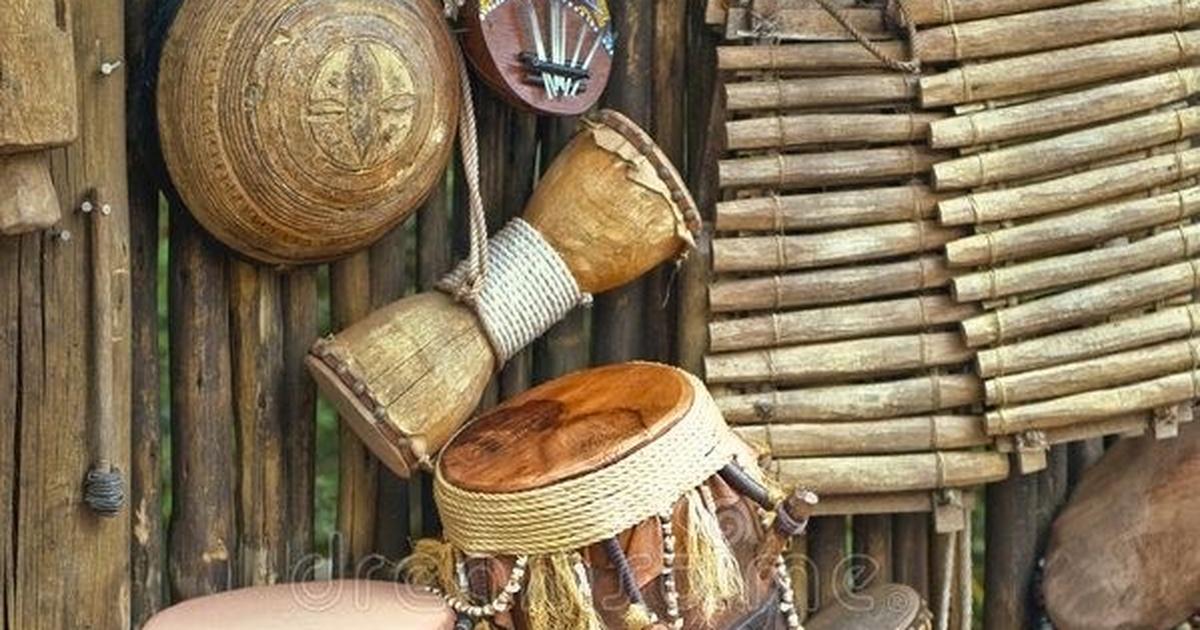 While some claim that this instrument has a Latin origin, others say that Maracas are of West African origin. The maraca belongs to the family of percussion musical instruments, a calabash-shaped object covered with beads usually arranged on strings.

The gourd can also be filled with pebbles or beads. Once the gourd is slapped, a unique sound is produced. It is often called “shekere” in Yoruba.

It is often called a “thumb piano” played with the thumb and fingers. The Mbira is an ancient musical instrument found in Africa as a continent.

However, the Shona people of Zimbabwe have a closer relationship with the instrument. It belongs to the family of idiophones with around 22 to 28 keys attached to the wooden surface.

It is a magnificent instrument famous for its versatility. Hitting different parts of the drum produces a wide range of pitch sounds.

This percussion instrument originated in Mandinka – present-day Mali in West Africa; it then spread to other West African countries; Guinea, Senegal and Gambia.

This instrument belongs to the woodwind family. It is made of leather covered wood consisting of a brass mouthpiece pipe, with four holes on the pipe for the fingers. The Algaita originates from West Africa; played among the Fulani of northern Nigeria.

Sound is produced by the pipe as a result of vibrations when air is blown through it. This sound is sometimes used in jazz music.

Like the djembe, the talking drum is very popular for the pitch range when beaten.

This animal-skin hour-shaped instrument is one of the oldest musical instruments in West Africa. Its origin dates back to the Yoruba, the Bono people and the Ghana Empire.

This musical instrument consists of small wooden planks arranged on a wooden platform (usually like the bars of a piano). In a way, the Marimba can be called an African xylophone.

The sounds are produced by hitting the wooden planks with a mallet or a stick. The Marimba is played in Kenya, Zambia, South Africa and Zimbabwe.

A stringed instrument is often likened to a guitar or a harp, and it is made up of a large gourd as the body and 21 strings. The Kora is a historic African instrument originating from Gambia, Senegal and Guinea-Bissau.