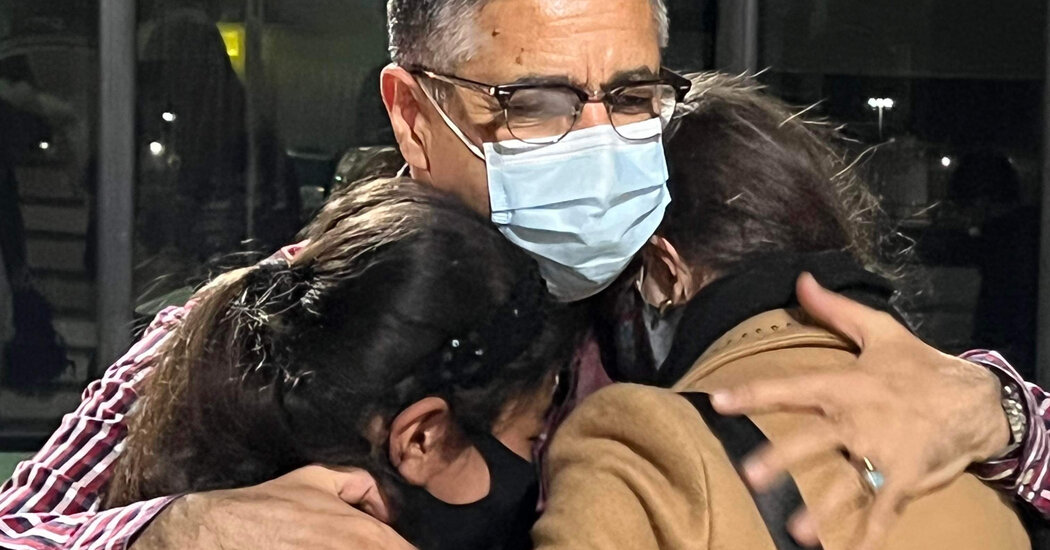 The plane from Kabul landed in Qatar around 6 p.m. Tuesday. Two 13-year-old musicians – Zohra and Farida, trumpeter and violinist – disembarked and ran towards their teacher. Then, witnesses said, they started to cry.

The girls were among the last students affiliated with the Afghan National Institute of Music – a renowned school that has been targeted by the Taliban in the past in part for its efforts to promote girls’ education – to be evacuated from Kabul since. that the Taliban regained power in August.

They joined 270 students, teachers and their relatives who, fearing that the Taliban would seek to punish them for their links with music, made the journey from Kabul to Doha, the capital of Qatar, with the departure of the first group in early October. . Most arrived last week, boarding four special flights organized by the Qatari government after months of delay. They plan to eventually resettle in Portugal, where they hope to obtain asylum.

“It is a huge relief,” said Ahmad Naser Sarmast, the school principal, in a telephone interview after returning from the reception of the girls at the airport on Tuesday. “They can dream again. They can hope.

The musicians are among hundreds of artists – actors, writers, painters and photographers – who have fled Afghanistan in recent weeks. Many have left because they are worried about their safety and see no way to make money as the arts come under government scrutiny.

Afghanistan under the Taliban

With the departure of the US military on August 30, Afghanistan quickly fell back under Taliban control. Across the country, concern for the future is widespread.

The Taliban are wary of non-religious music, which they outright banned when they ruled Afghanistan from 1996 to 2001. While the new government has not issued an official ban, radio stations have ceased to broadcast some songs and musicians began to hide their instruments. Some said they had been attacked or threatened for playing. Taliban spokesman Zabihullah Mujahid said in an interview with the New York Times in August that “music is prohibited in Islam” but that “we hope we can persuade people not to do such things, in August. instead of putting pressure on them ”.

The Afghan National Institute of Music has long been the target of the Taliban. The school embraced change, adopting a mixed model and devoting resources to the study of traditional Afghan music and Western music. The Taliban have frequently made threats against the school; Sarmast was injured by a Taliban suicide bomber in 2014.

The school has become known for supporting the education of girls, who make up about a third of the student body. The school’s all-female orchestra, Zohra, has toured the world and has been hailed as a symbol of a modern and more progressive Afghanistan.

When the Taliban consolidated their control over the country over the summer, the school was forced to close quickly. Taliban officials have started using the campus as a command center. The students and staff mostly stayed at home, fearing that they would be attacked for leaving. Some stopped playing music and began to learn other skills, such as weaving.

In the closing days of the American war in Afghanistan, supporters of the school carried out a frantic attempt to evacuate students and staff. At one point, seven buses filled with people trying to flee waited at Kabul airport for 17 hours, but were unable to board their plane when the door was closed for fear of a terrorist attack. After that, the school began to evacuate people more slowly and in small groups. But difficulties in obtaining passports have left some musicians stranded for months in Afghanistan.

Several star artists, including cellist Yo-Yo Ma and pianist and conductor Daniel Barenboim, offered their support. The government of Qatar provided shelter and helped negotiate with the Taliban to ensure safe passage.

“We hope that one day the circumstances in Afghanistan will encourage them to return home and participate in building the future of their country,” Lolwah Alkhater, Qatar’s deputy foreign minister, said in a statement.

On Wednesday, a group of students will play a concert in Doha to celebrate the school reunion. Among the songs there will be “Sarzamin-e Man”, which translates to “My homeland”.

“When I see them I’m just happy,” said Marzia, an 18-year-old violist and conductor of the Zohra orchestra, of her classmates. “I see them all happy and they feel free.”